WASHINGTON • Special counsel Robert Mueller is wrapping up his investigation of Russian interference in the 2016 presidential campaign and whether the Trump campaign cooperated with Moscow's operation, the acting US attorney-general announced.

"The investigation is, I think, close to being completed, and I hope that we can get the report from director Mueller as soon as possible," Mr Matthew Whitaker said on Monday.

His impromptu remark, at the end of a news conference about an unrelated case, was a highly unusual confirmation of the state of the special counsel's investigation.

Justice Department policy ordinarily prohibits public comment on open criminal inquiries, and Mr Mueller has refused to publicly discuss the investigation since he was appointed in May 2017 to oversee it.

Mr Whitaker, who is considered intensely loyal to President Donald Trump, said that he had been "fully briefed on the investigation" and that he looked forward to Mr Mueller delivering a report.

As soon as he described the special counsel's work as nearly over, a spokesman shut down the news conference, declaring hastily: "That's all the time for today. Thank you so much." 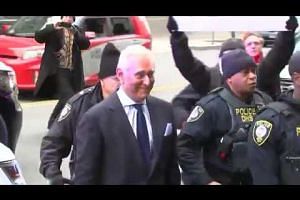 Mueller probe 'close to being completed': Acting US attorney-general

It was unclear whether Mr Whitaker had discussed his comments with Mr Mueller beforehand, or if he was speaking off the cuff.

Prosecutors typically shy away from discussing the progress of investigations to avoid unfairly framing public expectations, partly because new evidence could unexpectedly arise.

Mr Whitaker acknowledged that tradition before giving his assessment of Mr Mueller's progress. "I am really not going to talk about an open and ongoing investigation," he said.

His comments came on the heels of the indictment of Roger Stone, a Trump ally, on Friday on charges of witness tampering, obstruction of justice and lying to Congress about efforts by the Trump campaign to learn about how WikiLeaks might damage Democrat Hillary Clinton's campaign.

The new indictment was issued as Mr Mueller's team has pushed other criminal cases towards sentencing, including those against Mr Trump's former campaign manager Paul Manafort and former national security adviser Michael Flynn.

A version of this article appeared in the print edition of The Straits Times on January 30, 2019, with the headline 'Probe into Russian meddling in US election nearly over: Acting A-G'. Subscribe
Topics:
More
Whatsapp Linkedin FB Messenger Telegram Reddit WeChat Pinterest Print Purchase Article Copy permalink