WASHINGTON (REUTERS) - US Democratic presidential hopeful Elizabeth Warren told a town hall in Ohio on Monday (July 29) that if elected to the White House, she would use the leverage of the United States to raise labour and environmental standards via global trade agreements.

"We can't use trade as a way to drive down standards across the world, we need to use the leverage of American markets to drive up standards around the world," she said.

Ms Warren, a US senator from Massachusetts, was campaigning in Ohio ahead of a second round of back-to-back Democratic presidential debates this week.

Ms Warren, 70, has offered the most voluminous policy proposals in the crowded field of Democrats hoping to challenge Republican President Donald Trump in the November 2020 election.

Earlier on Monday, she outlined proposals that would govern her policy on international trade, including requiring trade negotiators to disclose drafts of new trade agreements to the public.

Her trade proposals also included a "border carbon adjustment" tax that would be levied against imported goods that require "carbon-intensive" manufacturing processes, she wrote on the online publishing platform Medium.

Mr Trump made tearing up the nation's trade deals a central part of his 2016 presidential campaign promises. In office, he renegotiated the North American Free Trade Agreement with Canada and Mexico and has sought new trade deals with Asian and European nations. 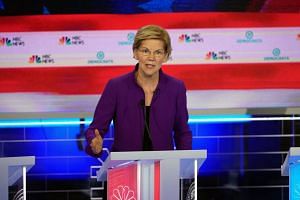 Mr Trump's policies on trade are often at odds with his Republican Party, which traditionally has embraced multi-nation trade deals and advocated for extensive free trade.

Instead, his protectionist-leaning trade policies have been more aligned with the historic positions of liberal Democrats.

That reversal has left many Democrats scrambling to find a way to counter Mr Trump, with those like Ms Warren and presidential rival US Senator Bernie Sanders opting to attack the way he has implemented his trade policies, but not the primary goals.

Ms Warren's new trade positions go a step farther, echoing some of the president's criticism that previous trade deals have been unfair to American workers, while calling for more liberal policies to be infused in trade deals.

"Here's the problem. These giant multinational corporations, they're not patriotic, they don't have any loyalty to this country, to these workers. They have loyalty to exactly one thing and that's the profitability of the bottom line," Ms Warren said in Toledo.

Ms Warren said the changes she would make to trade deals would start with "who is in the room to negotiate," promising there would be fewer "corporate CEOs and lobbyists" and more representatives from "labour, small businesses and environmentalists." She called for adding transparency to the trade negotiating process and allowing Congress a larger role in dictating the terms of trade deals.

Critics have said allowing Congress to amend trade deals before ratification would make it more difficult to reach an agreement since changes would have to be renegotiated with participating countries.

Ms Warren has outlined a set of conditions she wants other countries to meet before entering trade deals, including provisions regarding labour laws and efforts to stop human trafficking.

Ms Warren also calls for pre-conditions the United States would not currently meet, like being a party to the Paris Climate agreement and not providing domestic fossil fuel subsidies.

She also called for new trade policies for pharmaceuticals and agriculture products, including establishing new standards for imported goods.

Finally, Ms Warren called for increased enforcement, including utilising the World Trade Organisation, of which Mr Trump has been a vocal critic, to enforce higher standards around human rights and the environment for nations engaged in trade with the United States.