WASHINGTON -  US President Barack Obama has vowed to destroy the militant Islamic State in Iraq and Syria (ISIS) and hunt down any terrorist plotter, in a prime-time speech on Sunday (Dec 6) intended to reassure Americans that the war on terrorism will succeed.

“The threat from terrorism is real, but we will overcome it,” Mr Obama said in the rare televised address, only his third delivered from the White House Oval Office.

"We will destroy ISIL and any other organisation that tries to harm us, ”  he said, referring to the ISIS by its other name - Islamic State in Iraq and the Levant (ISIL).

The address comes after Wednesday's massacre in San Bernadino, California, which killed 14 people and wounded 21 at a Christmas party for county health inspectors at the Inland Regional Centre. 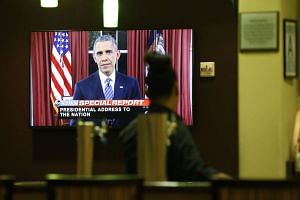 US authorities now believe extremists' online appeals had inspired Syed Rizwan Farook and his wife Tashfeen Malik to carry out the shooting.

But in contrast with the Paris attacks on Nov 13 which left 130 people dead, there has been no evidence so far that the husband and wife were part of a terrorist network.

Mr Obama, however, said the shooters had "gone down the dark path of radicalisation" and called it an "act of terrorism designed to kill innocent people".

He called on the US Congress to ensure that no one on a no-fly list should be allowed to buy a gun and to make it harder for people to buy powerful assault weapons. "What we can do and must do is make it harder from them to kill," he said.

Americans stock up on weapons after California shooting

In his address, Mr Obama stressed that Americans should not turn against one another by "letting this fight be defined as a war between American and Islam...ISIL does not speak for Islam, they are thugs and killers..." he said.

He emphatically called on Americans to "reject discrimination, religious tests on who we allow into this country....if we travel down that road, we lose, that divisiveness, that betrayal of our values plays into the hands of ISIS,"  he said.

He urged the Muslim community to confront the “extremist ideology” in its midst, saying "it’s a real problem that Muslims must confront without excuse."

Seeking to reassure the public that the government is taking all necessary steps to ensure the safety of Americans against terrorism and ISIS, Mr Obama reiterated the US strategy to defeat terrorism, but once again rejected the idea of having troops on the ground.

He said the US will continue to hunt down terrorists, provide training and equipment to ground forces, as well as work with allies to disrupt ISIS' operation and pursue a ceasefire in Syria so as to focus on the common goal of destroying ISIS.

Mr Obama has been under pressure to escalate efforts to break a year-long military stalemate with ISIS, which may have lost some ground in Iraq and Syria in recent months, but have turned to international targets, including the deadly attacks on public places in Paris and the downed Russian airliner over Egypt.

Frustrated with a Congress that has not authorised the use of military force on terrorists, he called for such a vote, which would demonstrate American unity.

He reiterated that the US "should not be drawn into a long and costly ground war". Instead, he stuck to his belief that air strikes, special forces and working with local forces would ensure a "sustainable victory".

He ended his speech on an optimistic note, calling on the American people to come together around "common ideas as one nation and one people".

"So long as we stay true to that tradition, I have no doubt America will prevail," he said.

This is the US president's third national address from the Oval Office - a significant symbol of US power and authority. His past two speeches were in 2010 when he announced the withdrawal of all US troops from Iraq and addressed the Gulf oil spill.