WASHINGTON (REUTERS, AFP, NYTIMES) - An adult-film actress who claims she had sex with Donald Trump before he was president said on Sunday (March 25) she had been threatened in 2011 while in a parking lot with her infant daughter to discourage her from discussing the relationship.

Stormy Daniels, whose real name is Stephanie Clifford, told CBS News' 60 Minutes that she was on her way to a fitness class with her child when an unknown man approached her, according to a transcript of the interview released on Sunday.

"And a guy walked up on me and said to me, 'Leave Trump alone. Forget the story.' And then he leaned around and looked at my daughter and said, 'That's a beautiful little girl. It'd be a shame if something happened to her mom.' And then he was gone," Ms Daniels said.

The experience left her shaking in fear and afraid she would drop her daughter, she added.

Ms Daniels sued the president on March 6, stating Mr Trump never signed an agreement for her to keep quiet about an "intimate" relationship between them. 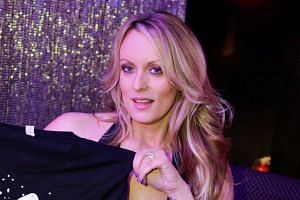 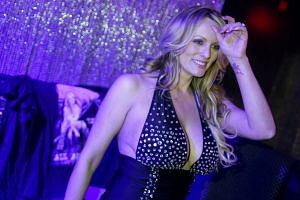 Stormy Daniels faces US$20 million in damages in Trump lawsuit

Mr Trump would have been married to his wife, Melania, during both the alleged extramarital relationships. The first lady accompanied him this weekend to his Florida golf club.

Mr Trump returned to the White House on Sunday, but a White House spokeswoman said Melania stayed behind as is her tradition during their son's school holiday.

Ms Daniels told 60 Minutes that she and Mr Trump had had sexual relations only once, but that she had seen him other occasions and he had kept in touch with her.

The White House has denied he had an affair with Ms Daniels, although Trump lawyer Michael Cohen said he paid her US$130,000 (S$170,885) of his own money during the 2016 presidential election campaign.

Mr Trump did not respond to reporters' shouted questions about whether he would watch the interview when he returned to the White House from Florida.

Mr Cohen, who has denied that there was an affair, has not explained why he made the payment or said whether Mr Trump was aware of it.

Ms Daniels and her attorney would not discuss in the interview whether they had text messages or other materials that might verify her story.

She was asked why she repeatedly signed statements denying the relationship with Mr Trump, and acknowledged that there could be questions about her credibility.

"I felt intimidated and... honestly bullied. And I didn't know what to do. And so I signed it," Ms Daniels said.

While there was not any threat of physical violence at the time, she said, she was worried about other repercussions. “The exact sentence used was, ‘They can make your life hell in many different ways,’ ” Ms Daniels told CNN's Anderson Cooper.

“They being...,” Mr Cooper said. “I’m not exactly sure who they were. I believe it to be Michael Cohen,” Ms Daniels replied.

Mr Cohen has denied threatening Ms Daniels. In the run-up to the 60 Minutes broadcast, Mr Michael Avenatti, Ms Daniels’ attorney, said repeatedly on cable news programmes that his client would talk about threats she received because of her allegations against Mr Trump.

Neither Mr Cohen nor his lawyer could be reached immediately for comment. He told Politico earlier this month that he has “never threatened her in any way and I am unaware of anyone else doing so".

He has also previously denied that Mr Trump had an affair with Ms Daniels.

Ms Daniels’ former business manager did not comment. Her former attorney, Mr Keith Davidson, said he cannot speak publicly until Ms Daniels waives attorney-client privilege, but he does not believe that her assertions on “60 Minutes” "represent a fair and accurate description of the situation.”

The White House did not respond to a request for comment on Sunday.

Representatives of Mr Trump have dismissed the allegations, saying that the affairs never happened and that Mr Trump had no knowledge of any payments.

But the two prime-time interviews – along with a judge’s decision this week to let a defamation lawsuit filed by former Apprentice contestant Summer Zervos, who alleges Mr Trump groped her, move forward – have intensified the spotlight on the President’s history with women.

When she asked about Melania – to whom he had been married less than two years and with whom he had an infant son – he did not want to talk about it, Ms Daniels said.

“He brushed it aside, said, ‘Oh yeah, yeah, you know, don’t worry about that. We don’t even – we have separate rooms and stuff.’"

They spent several hours together over dinner, and he told her that he wanted to get her onto The Apprentice, his reality television show. Then Daniels went to the bathroom, and when she returned, he was sitting on the bed.

“I realised exactly what I’d gotten myself into. And I was like, ‘Ugh, here we go,’ ” Ms Daniels told 60 Minutes.

Unlike Ms McDougal, who professed to have loved Mr Trump, Ms Daniels said she was not attracted to him and had gotten herself into a “bad situation".

Though she didn’t want to have sex with Mr Trump, she considered the sex consensual. “I was not a victim. I’ve never said I was a victim,” she said.

Mr Trump called her frequently over the next year, and she saw him a few times, but they never again had sex, she said. He continued to say he wanted to get her a spot on The Apprentice. In July 2007, about a year after they met, he asked her to meet him at the Beverly Hills Hotel to discuss a development related to The Apprentice.

They spent four hours together, with Mr Trump touching her leg and talking about “how great it was the last time", Ms Daniels said. When she asked about the development, he said he would let her know the following week.

She said she took her purse and left. The next month, he told her that she would not be on The Apprentice - and they never met again.

Ms Daniels, whose real name is Stephanie Clifford, gave an interview about the alleged affair to the tabloid In Touch in 2011. But that interview – which allegedly sparked the threat in Las Vegas – was not published at the time because Mr Cohen threatened to sue, according to 60 Minutes, relying on two former employees of the magazine.

In 2016, during the final months of the presidential campaign, she again started talking to media outlets.

She was offered “a large payday multiple times” for her story but turned it down, she said on 60 Minutes. Instead of giving another interview, she and her former attorney struck a deal with Trump attorney Cohen, according to the 60 Minutes interview and Ms Daniels’ lawsuit.

In late October, just days before the presidential election, she was paid US$130,000 in exchange for her silence, the lawsuit says.

Mr Cohen has said that he made the payment without reimbursement, though he has not said what it was for. The government watchdog group Common Cause argues that the payment was intended to influence the 2016 election by silencing Ms Daniels and therefore was an illegal in-kind contribution to Mr Trump’s campaign.

Mr Cohen has called the Common Cause complaints “baseless".

On 60 Minutes, Mr Trevor Potter, a former chairman of the FEC appointed by President George H.W. Bush, said he believes the payment could be seen as a campaign contribution and could create an “enormous legal mess” for Mr Cohen and Mr Trump. He said the problem is particularly acute for Mr Cohen if he was not reimbursed because he far exceeded the individual legal gift limit.

Mr Avenatti, Ms Daniels’ lawyer, disputes the notion that Mr Cohen was working in his personal capacity when he arranged the hush-money agreement.

In the 60 Minutes segment, he said Ms Daniels’ former lawyer sent her non-disclosure agreement to Mr Cohen at his Trump Organisation office in Trump Tower, and he showed what he said was the Fed Ex confirmation.

The cover letter with that document refers to Mr Cohen as executive vice president and special counsel to Donald J. Trump, the Trump Organisation.

Asked why viewers could be confident now that she was telling the truth, Ms Daniels said, "Cause I have no reason to lie. I'm opening myself up for, you know, possible danger, and definitely a whole lot of s***."

On her motives for speaking out now, Ms Daniels said she did not see herself as a victim or a part of the “Me Too” movement but simply wanted to set the record straight.

“I’m not okay with being made out to be a liar,” she insisted.

Asked what she would say to Mr Trump if he were watching the interview, she said: “He knows I’m telling the truth.”