WASHINGTON (WASHINGTON POST) - The idea of Mr Michael Avenatti running for president seemed ridiculous to most observers at the start.

Mr Avenatti did play a major role in eventually getting Mr Donald Trump's former lawyer Michael Cohen to implicate the President in a federal crime.

With Supreme Court nominee Brett Kavanaugh having just secured the 50th and 51st votes to assure his confirmation, attention has turned to Mr Avenatti's role in the failed effort.

After several days of making the cable TV rounds teasing his new client, he released a sworn affidavit from Ms Julie Swetnick that not only included the most serious accusations to date - that Mr Kavanaugh appeared to have participated in gang rapes - but also did so with the least corroboration. 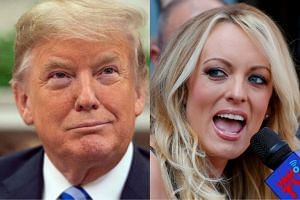 Stormy Daniels lawyer hints at presidential run, says he would 'hit harder' to beat Trump in 2020

Many media outlets treated the accusation with scepticism, and Ms Swetnick's past was probed for litigiousness and other issues.

Ms Swetnick also appeared to temper some of the claims and implications contained in her affidavit during an interview with NBC News.

By the end of the confirmation battle, the Swetnick allegation became a key GOP talking point - alleged proof positive that, while allegations such as Dr Ford's could perhaps be taken seriously, this was at least in part a political effort using frivolous and ridiculous charges.

That a man with eyes for the 2020 Democratic nomination was behind them made that argument easier to make.

Senator Susan Collins, a Maine Republican, drove that point home more than anyone on Friday (Oct 5), joining her more conservative fellow Republicans in listing Mr Avenatti's allegation in her floor speech announcing why she would be the pivotal 50th vote for Mr Kavanaugh.

As Ms Collins delivered her speech, simmering doubts about Mr Avenatti's actions and their helpfulness bubbled up on social media.

Just because Republicans cited Mr Avenatti, of course, doesn't mean that he actually hurt the cause.

But putting Ms Swetnick's allegation directly into the public domain - rather than running it through media vetting or just going to law enforcement - put Democrats in a tough spot.

Did they treat all the women's allegations as credible, or did they focus on some and confess (either publicly or implicitly) to being more dubious about others?

If they did the latter, it would lend credence to the idea that some of these allegations were indeed frivolous.

It would put them in the position of explaining why one largely uncorroborated allegation was important and believable, but another wasn't.

Democrats certainly didn't focus on Ms Swetnick as much as the other accusers, most notably Dr Ford.

But some senators, including Ms Dianne Feinstein, a California Democrat, and Mr Patrick Leahy, a Vermont Democrat, did suggest that the allegation was credible and should be treated seriously during the confirmation hearings and the FBI's investigation. It wasn't ultimately included in either.

None of this is to say that Ms Swetnick's allegation has been disproved or is even necessarily untrue.

But Mr Avenatti's decision to go it alone and attach himself to the process certainly made it easier to paint it a certain way.

In an interview, the Washington Post asked him why he didn't go through the media first, to see whether reporters could vet it and perhaps lend it some credibility.

He called it a "ridiculous" idea.

"Why in God's name would I have gone through the media?" Mr Avenatti said. "The media does not determine the veracity of facts and evidence."

Mr Avenatti argued that if his client wasn't the GOP's target, it would have been someone else. (Before Swetnick's allegation, there was some consternation about whether the New Yorker should even have published Ms Ramirez's allegation, given the lack of corroboration by both the New Yorker and the New York Times.)

"If the Republicans were not fabricating things about our case, they would be fabricating about another," he said. "Look at the disgusting way they have attacked Dr Ford."

Democrats probably aren't terribly eager right now to engage in second-guessing people like Mr Avenatti, to whom they should be legitimately grateful for his past work.

They'll be much more interesting in airing complaints about the GOP-led process that arrived at Mr Kavanaugh's presumptive confirmation. And perhaps this was just not a winnable battle, period.

But politicians make decisions about when to insert themselves into issues. And Mr Avenatti, to the extent he's going to be a Democratic politician and a voice for that party, made a move that will cause the party to evaluate his wisdom.