Issue of North Korea will be raised in regional meetings in Singapore, says State Dept official

Secretary of State Mike Pompeo will be bringing a message of American engagement in the Indo-Pacific to Asean and East Asia Summit ministers in Singapore this week.

This is despite awkwardness over Cambodia's recent uncontested elections, which the United States has sharply criticised.

A senior US State Department official told reporters on Tuesday that Mr Pompeo, who chairs the US' Lower Mekong Initiative, " will reinforce our partnership on transboundary cooperation with the five Lower Mekong partner countries".

The discussions with Myanmar, Cambodia, Thailand, Laos and Vietnam will cover many topics, including water resource management, "which is quite timely given the recent dam tragedy in Laos", the official said.

At a ministerial meeting with the 10 Asean member states, Mr Pompeo will "underscore the importance of our strategic partnership with Asean" and highlight the US commitment to Asean centrality, the official added.

And at the East Asia Summit, Mr Pompeo will meet his counterparts from Asean as well as Australia, China, Japan, India, New Zealand, South Korea and Russia to address the region's "most critical security challenges".

The official listed, among other things, the denuclearisation of North Korea, the South China Sea dispute, terrorism, maritime and cyber security, as well as the crisis in Myanmar's Rakhine state.

The issue of North Korea may loom large in the wake of reports of petroleum transfers in violation of United Nations sanctions.

Mr Pompeo will underscore that all UN member states must implement Security Council sanctions and resolutions to maintain pressure on Pyongyang. 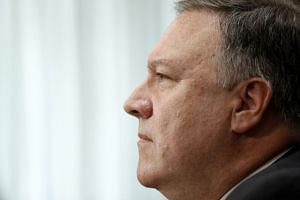 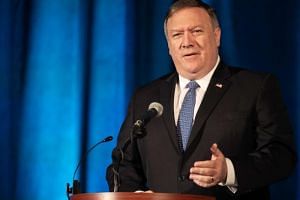 US Secretary of State Mike Pompeo to visit Singapore this week, plans S$154m worth of investments in Indo-Pacific

US back to the table with economic strategy for Indo-Pacific

The official said: "That… will be addressed… as we all strive for the ultimate goal, and that is the final, fully verified denuclearisation of (North Korea), as agreed to by Chairman Kim (Jong Un)."

Yet, North Korea should not dominate the meetings, Dr Bal-bina Hwang, visiting professor at Georgetown University, told The Straits Times.

"The reality is that North Korea's ongoing missile development should be a surprise to no one. The North Koreans are master negotiators and… this does not violate either the Singapore or inter-Korean statements," she said. "This is precisely the problem."

No one, and especially the North Koreans, has yet to define in concrete terms what "denuclearisation" really means.

Iran's Foreign Minister Javad Zarif will also be in Singapore to sign the Treaty of Amity and Cooperation with Asean. But Mr Pompeo has no meetings scheduled with the Iranians, State Department spokesman Heather Nauert told ST.

Russian Foreign Minister Sergey Lavrov will also be in town for meetings with Asean and its dialogue partners, but Mr Pompeo will not be meeting one-on-one with him, the Russian news agency TASS reported.

As part of his trip, Mr Pompeo will also meet Prime Minister Mahathir Mohamed in Malaysia and President Joko Widodo in Indonesia.

"Many in the region have had questions about the direction of US economic engagement with the region," said Mr Murray Hiebert, senior associate of the South-east Asia Programme at the Centre for Strategic and International Studies. "Asean officials... will be listening carefully for more details about how the US plans to engage the Indo-Pacific economically."

A version of this article appeared in the print edition of The Straits Times on August 02, 2018, with the headline 'Pompeo to assure Asean of US engagement in region'. Subscribe
Topics:
More
Whatsapp Linkedin FB Messenger Telegram Reddit WeChat Pinterest Print Purchase Article Copy permalink