ORLANDO (WASHINGTON POST) - The authorities in the United States state of Florida on Tuesday (Aug 30) released a handful of 911 calls about the shooting inside Pulse nightclub in Orlando, making public for the first time recordings of what the police were told about the attack while it was happening.

In the calls, a series of increasingly distraught callers can be heard alerting police to the shooting and warning of injured friends and relatives who were trapped at the venue.

Callers were asking the police about when they were going to go inside the club, warning that more people were going to die if they didn't get in there and worrying about those trapped inside. "He's over there," one caller said about her husband. "He said he cannot get out."

Another caller said they receiving a text message from a friend who reported being shot three times and going into a bathroom at the club.

"We called him because he posted on Facebook that he got shot," the caller told the dispatcher shortly after 2.40am. "So we said, 'Is everything OK?' He said, 'Got shot three times.' We said, 'Where are you?' And the response was, 'In bathroom. Tell them to check the bathroom.'" 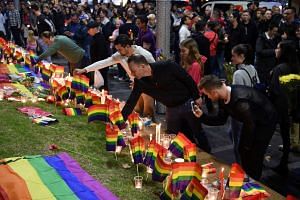 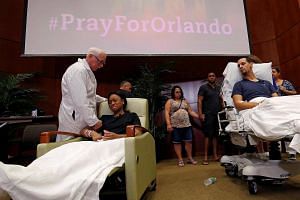 By this point, however, the gunman had barricaded himself in the bathroom. And what began as an active shooting rampage inside a crowded nightclub turned into what became a stand-off lasting nearly three hours.

Ultimately, police say Omar Mateen, the attacker, remained there until dying in a shootout with the police.

The Orange County Sheriff's Office released the limited selection of calls on Tuesday in response to public records requests stemming from the June 12 massacre at Pulse, which left 49 people dead and dozens of others injured.

These calls from the sheriff's office were not from people inside Pulse, but were instead calling after hearing from relatives or friends of people inside.

The authorities had previously refused to release any of the 911 calls, providing only a limited transcript of Mateen's discussions with the police, during which he identified himself as the Orlando shooter and pledged loyalty to the head of the Islamic State in Iraq and Syria (ISIS).

The police had also made public documents showing that dispatchers spoke with people inside the club who reported seeing the gunfire or described gruesome injuries they were seeing.

Many of the 911 calls made during the Pulse shooting and the ensuing stand-off were made to the Orlando Police Department, which has not released any of the audio so far. While Florida has broad public records laws, the state has exemptions for information deemed to be part of "active" criminal investigations, and city officials say the 911 recordings are part of an ongoing criminal probe that involves the Orlando police but is being led by the FBI.

A group of media organisations that includes The Washington Post have gone to court to seek these records. Orlando Mayor Buddy Dyer directed his city to file a lawsuit seeking guidance from a court about what records should be released. City officials say that there are hundreds of 911 calls that cannot be released without a court's directive.

Since the attack inside Pulse, the deadliest mass shooting in modern American history, the authorities have been investigating both the shooting and how officers handled it. The Justice Department, at the Orlando Police Department's request, is reviewing the law enforcement response to the entire incident.

Earlier this month, the Post published an account of the shooting and the hostage stand-off that provided the clearest picture yet of the law enforcement response and what unfolded inside the club.

These details raised questions about how police and fire agencies responded to the shooting, as survivors and others have criticised law enforcement officers for not moving inside more quickly to subdue Mateen.

Officials say they do not know yet how many of the victims who were alive during the three-hour stand-off died in the bathrooms or how many people who died in those rooms had survivable gunshot wounds.

At least five people were alive in the bathrooms when the stand-off began and ultimately died at the club, including three victims - Deonka Deidra Drayton, Eddie Justice and Alejandro Barrios Martinez - who sent text messages from inside the club's bathroom.

Orlando Police Chief John Mina defended his officers and their actions in an interview last month, saying that they opted not to go into the bathroom only when Mateen stopped shooting and it became a hostage situation.

"If he had continued shooting, our officers would have went in there," Mr Mina said.

The Florida Department of Law Enforcement, meanwhile, is investigating the 14 officers who opened fire at the club over the course of the episode to see if their use of force was legal under Florida law.

Last week, that agency said it provided its findings to the state attorney's office in Orange and Osceola counties, which will determine whether the shooting was justified.

The voice mails released by the Orange County Sheriff's Office traced a grim arc through the evening, beginning with a call just after 2am reporting gunfire on through calls made after 5am, as the Swat team was readying to storm the building.

In between, a series of frantic callers described what they knew and heard. One person said her brother was trapped in a bathroom and "he said there's a lot of dead people" inside.

Another caller had said he had just left Pulse not long before the shooting. When he got home, he said he learnt that "a lot of my friends got shot".

Increasingly, the questions focused on the police response.

"Where's the ambulance, where the medic?" one caller said people wondered. Another caller yelled at the dispatcher that he had called about his girlfriend in the bathroom and was asked repeatedy how to spell her name.

"This is the fifth time I'm calling you guys and telling you the same information," the caller said shortly after 4.30am. "It's been over a half an hour now, and no cops inside the club."

One man, who sounded distraught, said that he and his wife were driving to Pulse from out of town because their son was trapped in a bathroom.

"He's still in the bathroom where he's bleeding," he said just after 5am. "He got shot, and nobody's going in for him."

The dispatcher told him that the Orlando police were about to go inside the building, so they should urge anyone inside the bathroom to listen to the officers.

"Try to tell them just to listen to whatever the police tell them to do," the dispatcher said. "OK," the man said. "OK. Anybody dead yet?"