WASHINGTON (REUTERS) - No one from the US Defence Department was listening to a July phone conversation between President Donald Trump and Ukrainian President Volodymyr Zelenskiy that is at the heart of a House of Representatives impeachment inquiry, the Pentagon said on Thursday (Oct 3).

Democrats accuse Trump of using US military aid as leverage in an attempt to enlist Ukraine's help in investigating Democratic rival Joe Biden ahead of the November 2020 election.

The call, and who from the Trump administration was on it, as was Secretary of State Mike Pompeo, has become a matter of congressional interest.

Pentagon spokesman Jonathan Hoffman told a news briefing that the department's general counsel's office has directed all pertinent Ukraine-related documents and records be provided for cataloguing and review. He noted congressional interest in a possible investigation by the Pentagon's inspector general.

House Democrats have launched a formal impeachment inquiry into Trump.

The Republican president, who denies any wrongdoing, asked his Ukrainian counterpart in a July phone call to investigate whether Biden, his predecessor Barack Obama's vice president, had shut down an investigation into a gas company that employed his son Hunter.

The call came after Trump ordered the government to freeze the military aid. He later lifted the freeze, and the Pentagon has resumed sending aid to Ukraine.

In a separate briefing with reporters, the head of US forces in Europe said he was in favor of sending additional Javelin antitank missiles to Ukraine.

"Right now it is my military advice that I think we should go forward with that," Air Force General Tod Wolters told reporters at the Pentagon, referring to the sale of additional Javelin missiles to Ukraine. 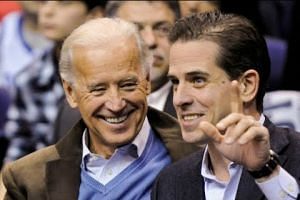 On Thursday, the State Department announced that it had approved the potential sale of 150 Javelin missiles to Ukraine.

Ukraine is mired in a conflict with pro-Russian separatists in the east of the country.