NATIONAL HARBOR (AFP) - US Vice-President Mike Pence on Thursday (Feb 22) assailed the North Korean leader's sister who sat near him at the Olympics as part of an "evil family clique" that oppresses millions.

Pence and Kim Yo Jong, the sister of North Korean leader Kim Jong Un, sat in the same box during the Feb 9 opening ceremony of the Winter Games in Seoul, but the pair did not interact.

That scene, broadcast worldwide, was closely watched for its diplomatic signals.

US officials said later that Pence and North Korean officials had planned to meet secretly during the Games, but that Pyongyang scrapped the talks at the last minute after he criticised the "murderous regime."

Pence on Thursday had choice words for the North Korean leader's sister, who was given wide press coverage during her appearance at the games.

"The sister of Kim Jong Un is a central pillar of the most tyrannical and oppressive regime on the planet, an evil family clique that brutalises, subjugates, starves and imprisons its 25 million people," he told thousands attending the Conservative Political Action Conference.

"And we will keep standing strong until North Korea stops threatening our country, our allies, or until they abandon their nuclear and ballistic missiles once and for all."

During his Asian tour, Pence denounced the North's nuclear drive and sought to shore up ties with regional allies - and longtime North Korean foes - Japan and South Korea.

Meanwhile, North Korea on Thursday accused United Nations Secretary-General Antonio Guterres of being a "kind of henchman who is representing the United States" after the UN chief said sanctions were essential to pressure Pyongyang. 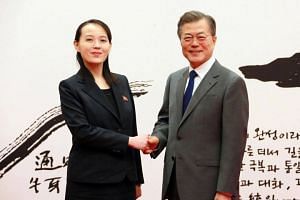 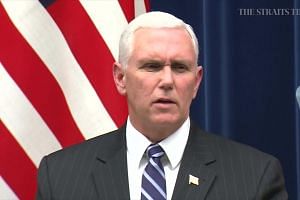 North Korea's mission to the United Nations released a statement complaining of "reckless remarks" by Guterres during the Munich Security Conference last week.

At the conference, Guterres praised the Security Council for succeeding in putting "through sanctions a very meaningful pressure over North Korea," adding: "The pressure in my opinion is absolutely essential to be maintained."

"This is nothing but an absurd sophistry inappropriate to his duty as secretary-general of the United Nations and only make us to think whether he is a kind of henchman who is representing the United States," said the North Korean mission in a statement.

North Korea argued that the United States was at fault for the crisis on the Korean peninsula and that Pyongyang's nuclear and missile tests were a legitimate form of self-defence.

Guterres' remarks were "ill-minded", said the mission, before requesting that the UN chief "refrain from his behavior acts like somnambulist any further."

Led by the United States, the Security Council last year imposed three new sets of sanctions on North Korea aimed at piling pressure on Pyongyang to abandon its nuclear and missile tests. The economic measures are aimed at cutting off revenue to Pyongyang's military programs.

During a visit to South Korea this month, Guterres met briefly with North Korea's ceremonial head of state Kim Yong Nam and urged dialogue to address the crisis.

The UN chief has been a strong supporter of the thaw in relations between Pyongyang and Seoul during the Olympics, which he maintains could provide the basis for a broader dialogue.