BROWNVILLE, NEBRASKA (REUTERS) - Vice-President Mike Pence arrived in Nebraska on Tuesday (March 19) to take stock of the devastation unleashed across the United States Midwest by floods that have killed four people, left one missing and caused more than a billion dollars in damage to crops, livestock and roads.

The floodwaters have inundated a large swathe of farm states Iowa and Nebraska along the Missouri River, North America's longest river, prompting half of Iowa's 99 counties to declare states of emergency.

"Touched down in Omaha, Nebraska to survey flood damage & thank volunteers & emergency personnel," Mr Pence said on Twitter, in a post that included photos of him meeting the governors of both states and lawmakers.

"The hearts of the American people are with those who have been impacted across the Midwest!" Mr Pence said in the tweet.

Nebraska, Iowa and Wisconsin have all declared states of emergency in the floods, which stem from a powerful winter hurricane known as a "bomb cyclone" that slammed into the US Farm Belt last week, killing untold numbers of livestock, destroying grains and soybeans in storage, and cutting off access to farms because of road and rail damage.

The latest confirmed death was identified by the sheriff in Fremont County, Iowa, as 55-year-old Aleido Rojas Galan, who was pulled from floodwaters along with another man on Friday and later succumbed to injuries.

A Nebraska man who has been missing since the collapse of the Spencer Dam last week on the Niobrara River was identified by the Omaha World-Herald newspaper as Kenny Angel.

Touched down in Omaha, Nebraska to survey flood damage & thank volunteers & emergency personnel. I’m joined by NE @GovRicketts, @IAGovernor, @SenJoniErnst, @SenSasse & @RepDonBacon. The hearts of the American people are with those who have been impacted across the Midwest! pic.twitter.com/Wei2fioRbT

Surveyed the flood damage in Nebraska & Iowa today by helicopter with @GovRicketts & @IAGovernor to see firsthand the devastation impacting much of the Midwest. @POTUS & I are with the communities impacted & will remain with them as they recover. pic.twitter.com/Q0Kz7XsYDj

The authorities said they had rescued nearly 300 people in Nebraska alone, with some rivers continuing to rise.

Rescuers could be seen in boats pulling pets from flooded homes. Some roadways crumbled to rubble, while sections of others were submerged. In Hamburg, Iowa, floodwaters covered buildings.

In Brownville, Nebraska, floodwaters lapped at the edge of the small town of 132 people, closing the main bridge across the Missouri River.

"It's a lot worse than I've ever seen it," said Ms Malina Wheeldon, who went ahead with the scheduled opening of her new Euphoric Soul Salon & Boutique business despite the floods. Her husband, Justin, who grew up in Brownville, agreed, saying he had lived through the floods of 1993, 2010 and 2011. 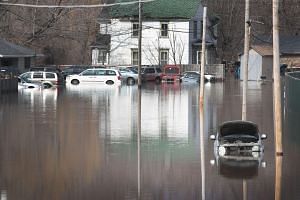 Parts of US Midwest deluged in historic deadly floods

The Missouri was expected to crest at 14.5m on Tuesday, breaking its 2011 record by more than 30cm, the Nebraska Emergency Management Agency said. The flooding is expected to continue through to Thursday.

Nebraska officials estimated more than US$1 billion (S$1.35 billion) in flood damage for the state's agricultural sector so far, according to Mr Craig Head, vice-president of issue management at the Nebraska Farm Bureau. He said the number was expected to grow as floodwaters recede.

Mr Matt Perdue, government relations director for the National Farmers Union trade group, said: "It's really too early to know for sure how bad this is going to get. But one thing we do know: It's catastrophic for farmers... We're hoping it's only US$1 billion, but that's only a hope."

Nebraska officials estimate the floods have caused US$553 million in damage to public infrastructure and other assets, as well as US$89 million in privately owned assets, according to the state's Emergency Management Agency on Tuesday.

The water also covered about a third of Offutt Air Force Base near Omaha, home to the US Strategic Command, whose responsibilities include defending against and responding to nuclear attacks.

The US Army Corps of Engineers is distributing 400,000 sandbags to operators of 12 levees along the Missouri River in Missouri and Kansas that were in danger of being breached by floodwaters, the Army Corps said in a news release on Tuesday.

Visited the relief shelter at Elkhorn Middle School today to let the Nebraska flood victims know @POTUS and I are WITH them & to thank the incredible military personnel & @RedCross volunteers helping those impacted. THANK YOU! pic.twitter.com/ZA6X7qfeSi

In Niobrara, Nebraska, south of the Missouri River near the border with South Dakota, Mayor Jody Stark said flooding that began last Thursday had devastated his community of 350 people, with businesses being the hardest hit.

"Our road system is shot pretty much in every direction coming into town," he said.

"It's one day at a time. We will do what we can to get back on our feet," he said. "It's just so heartbreaking. It's going to be tough, but hopefully we can all get through it."

Roads leading to the Nebraska Public Power District's Cooper nuclear plant near Brownville were engulfed by floodwaters from the Missouri, but the facility was still operating safely at full power on Tuesday.

The plant operator was flying staff and supplies to the plant with helicopters, said power district spokesman Mark Becker.