NEW YORK (NYTIMES) - The University of Farmington in Farmington Hills, Michigan, billed itself as a "nationally accredited business and STEM institution", with an innovative curriculum, flexible class schedules and a diverse student body.

But it had no curriculum, no classes and no real students, the authorities said this week.

The university in the suburbs of Detroit was part of an undercover operation by the Department of Homeland Security designed to expose immigration fraud, according to federal prosecutors who announced charges in the case.

In what the authorities called a "pay to stay" scheme, foreign students knowingly enrolled in the fake school to falsely maintain their student visa status and remain in the United States, according to prosecutors.

The authorities charged eight "recruiters" in the case. They are accused of enlisting at least 600 people to enroll in the school. Prosecutors said the recruiters collected money from the fake university for bringing in students and made more than US$250,000 (S$337,000) in profit.

Immigration and Customs Enforcement (ICE) also detained people who had enrolled at the university, according to immigration lawyers working on the case.

"I have received calls from Georgia, Louisiana, California, North Carolina," said Mr Ravi Mannam, an immigration lawyer based in Atlanta. "It seems to be a nationwide ICE action as we speak."

The students swept up in the scheme were largely from India, lawyers said. 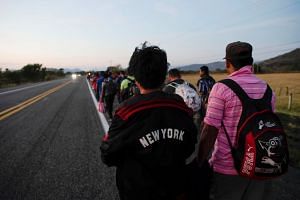 US hardens stance on immigration, ramps up efforts to deport Vietnam War refugees

"We are all aware that international students can be a valuable asset to our country," Mr Matthew Schneider, the US attorney for the Eastern District of Michigan, said in a news release on Wednesday (Jan 30).

"But as this case shows, the well-intended international student visa programme can also be exploited and abused."

ICE did not respond to requests for comment on Thursday.

Undercover agents from Homeland Security Investigations had posed as the owners and employees of the University of Farmington since February 2017, the indictments said.

The university had a real website with programme details, tuition pricing and contact information. The phone number for the university went to a voicemail box for the "office of admissions". But the university was not staffed with instructors and had no actual classes, according to the indictments.

Prosecutors said that everyone involved with the school knew that.

"Each of the foreign citizens who 'enrolled' and made 'tuition' payments to the University knew that they would not attend any actual classes, earn credits, or make academic progress towards an actual degree in a particular field of study," the indictments said, adding that the students knew that "discretion should be used when discussing the programme with others".

But Mr Mannam, the immigration lawyer, criticised the undercover operation as misleading and said some students had believed they were enrolling in a legitimate programme.

He said some students had come from India to the US to enroll elsewhere, only to find that their intended programme had lost accreditation. So they enrolled at the University of Farmington, believing that they could apply their prior credits to the new programme, which seemed to emphasise work experience, he said.

Other students had completed legitimate master's programmes in the US but were waiting to be approved for a specialty work visa, so they enrolled in school as a "stopgap measure", he said.

"The government utilised very questionable and troubling methods to get these foreign students to join the institution," Mr Mannam said.

Mr Rahul Reddy, an immigration lawyer in Houston, said he had spoken with about 25 students who had enrolled at the University of Farmington and who were facing possible consequences. Some had already been arrested, he said, while others had rushed to leave the country.

He warned that international students should guard against universities that do not hold regular classes or that offer a work permit immediately.

The scene in Michigan was reminiscent of a similar operation in New Jersey two years ago, when federal prosecutors and ICE announced that the University of Northern New Jersey, with its official website and seal featuring the Latin words "Humanus, Scientia, Integritas", was a fake set up by the government.

In that case, the authorities arrested about 20 brokers who they said had recruited foreign students to the university. Twenty-five students were listed as anonymous co-conspirators. Within days, more than 1,000 of them were ordered to appear in immigration court, facing deportation or even a lifetime ban from the US.

Most of the students in that case were from China and India. Officials said that the students were "100 per cent fully aware" that they had enrolled in a fake school. But some insisted that they were collateral damage, duped by both the brokers and the government.

By Thursday, the website for the University of Farmington, which had once appeared to show photos of students, had been taken down.

It was replaced with a page showing the university's logo next to a law enforcement badge and a warning: "The University of Farmington has been closed by the US Department of Homeland Security."