CHICAGO • Tens of millions of Americans braved arctic-like temperatures as low as minus 49 deg C that paralysed the US Midwest and were blamed for at least 21 deaths.

Warmer-than-normal weather was on the way, but that offered little comfort to vulnerable populations such as the homeless and elderly enduring cold that caused frostbite in minutes and made being outside potentially deadly.

The death toll rose from a previously known 12 after at least nine more people in Chicago were reported to have died from cold-related injuries, according to Dr Stathis Poulakidas, a doctor at the city's John H. Stroger Jr Hospital.

Dr Poulakidas, a trauma specialist, said the hospital had seen about 25 frostbite victims this week.

He said the most severe cases risked having fingers and toes amputated.

WORST NOT OVER YET

We are not done yet. We've got another 24 hours where the weather will be at dangerous levels.

Among those believed to have died from the cold was University of Iowa student Gerard Belz.

The 18-year-old was found unresponsive on campus early on Wednesday just a short walk from his dorm, according to university officials.

Police told a local television station that they believed the cold played a part in his death.

The wind chill at the time that officers found Mr Belz was minus 46 deg C, according to the National Weather Service.

The bitter cold was caused by the mass of air known as the polar vortex drifting south from its usual position over the North Pole.

Homes and businesses used record amounts of natural gas to fight the cold, according to financial data provider Refinitiv. Utilities appealed to consumers to conserve energy to prevent power outages. 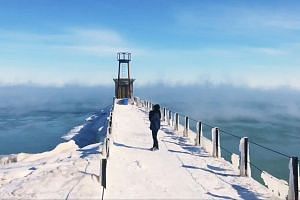 In US Midwest, -5.5 deg C 'feels like spring' after days of brutal cold; but death toll may rise

In Detroit, General Motors suspended operations at 11 Michigan plants to cut natural-gas consumption. Fiat Chrysler Automobiles cancelled a shift on Thursday at two of its plants.

Water mains froze in Detroit, Chicago and parts of Canada, and power outages were reported in Iowa and Wisconsin.

Nearly 1,700 flights had been cancelled in Chicago by Thursday afternoon. Airport crew worked in 15-minute increments on the tarmac to avoid frostbite.

Rail service Amtrak planned to begin partially restoring service after cancelling on Wednesday all lines in and out of Chicago.

The sub-zero temperatures were expected to lift over the weekend, but the misery would not end quickly in the roughly dozen states most affected.

"We are not done yet. We've got another 24 hours where the weather will be at dangerous levels," Michigan Governor Gretchen Whitmer told a news conference.

A version of this article appeared in the print edition of The Straits Times on February 02, 2019, with the headline 'Over 20 dead as US Midwest endures arctic conditions'. Subscribe
Topics:
More
Whatsapp Linkedin FB Messenger Telegram Reddit WeChat Pinterest Print Copy permalink