NEW YORK • In a wide-ranging speech to the United Nations yesterday, US President Donald Trump also touched on these issues:

He decried threats to sovereignty in Ukraine and the South China Sea, but did not explicitly mention Russia and China, even though it was clear the comment was aimed at Moscow and Beijing.

"We must reject threats to sovereignty from the Ukraine to the South China Sea," Mr Trump said. "We must uphold respect for law, respect for borders and respect for culture, and the peaceful engagement these allow."

Mr Trump said it was embarrassing that nations with egregious human rights records sat on the UN Human Rights Council.

He also said the US pays 22 per cent of the UN budget, much more than anyone else.

"The United Nations must reform if it is to be an effective partner in confronting threats to sovereignty," said Mr Trump.

He added: "Making a better life for our people is working together in harmony and unity to make a safer future for all people.

"The United States will forever be a great friend to the world and especially to its allies. 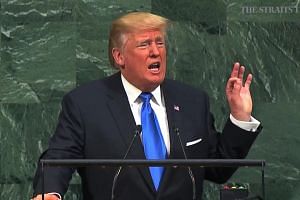 "But we can no longer enter into a one-sided deal where the US gets nothing in return."

Mr Trump said uncontrolled migration was "deeply unfair" for both the receiving and sending countries.

"For the cost of resettling one refugee in the United States, we can assist more than 10 in their home region," he pointed out.

Asserting that the US is a compassionate nation that has pledged billions of dollars, he said, "we support the recent agreements of the G-20 nations that will speak to host refugees as close to their home countries as possible".

He thanked Jordan, Turkey and Lebanon for hosting refugees from the Syrian conflict.

A version of this article appeared in the print edition of The Straits Times on September 20, 2017, with the headline 'Other highlights of US President's address'. Subscribe
Topics:
More
Whatsapp Linkedin FB Messenger Telegram Reddit WeChat Pinterest Print Purchase Article Copy permalink