Nine-month-old Kinsley Tipton is still more than 17 years away from being able to vote in US elections.

But her parents dressed up their little girl in red, white and blue and took her along on a 40-minute drive, from their home in Canton, Ohio, to Broadview Heights, to join about 200 people at a campaign rally for Ohio Governor John Kasich.

Her mother, Mrs Samantha Tipton, 29, said: "Look at the other candidates he's running against. It's a circus."

On Saturday, however, the front runner for the Republican Party's nomination for United States presidency, Mr Donald Trump, came to Ohio, and the clowning ended.

His rallies turned the state into what it has always been known as in the presidential elections - a battleground. But this time, the fight was a little too real.

While a polite crowd greeted Mr Kasich and his homespun family-friendly banter at the Caterpillar equipment dealership last week, more than 8,000 supporters and protesters came out to cheer and boo Mr Trump - and each other - on Saturday as he hurled one insult after another at his opponents, critics and the media.

Just two hours earlier, Secret Service officers had to scramble round Mr Trump after a man charged the stage in Dayton, Ohio, 340km south of Cleveland. The contrasting events highlighted the schizophrenia that has seized American voters on all sides of the political spectrum in a primary election campaign that is becoming the longest, strangest trip in modern memory.

On Saturday, however, the front runner for the Republican Party's nomination for United States presidency, Mr Donald Trump, came to Ohio, and the clowning ended. His rallies turned the state into what it has always been known as in the presidential elections - a battleground. But this time, the fight was a little too real.

Tomorrow, it could all end right here in Ohio - or get even stranger. On the Republican side, some polls show Mr Trump doing what he did in neighbouring Michigan last week on Tuesday - winning. That could be a knockout punch in his fight for the party's nomination.

Other polls, though, have Mr Kasich taking the 66 delegates at stake in his winner-take-all home state.

Pundits predict that this could keep other candidates from reaching the magic number of 1,237 delegates needed for the Republican nomination and add up to even more "chaos" at the party's convention here in Cleveland in July.

Likewise, polls show Mrs Hillary Clinton with a wide lead over Mr Bernie Sanders in Ohio's Democratic primary, a result that could seal her bid for her party's nomination. Then again, so did polls in Michigan, where Mr Sanders pulled off a shock win last Tuesday.

With so much at stake, candidates keep popping up in TV commercials and at rallies all over the state. The other two Republicans still standing - senators Ted Cruz and Marco Rubio - seemed to have virtually written off Ohio, leaving Mr Kasich to duke it out in the daunting fight with Mr Trump.

Following the violence that forced him to scrub an appearance in Chicago on Friday night, Homeland Security agents, the Secret Service and police on horseback patrolled Mr Trump's rally in Cleveland's I-X Centre, inside and out, on Saturday.

Inside the cavernous hall, the roar was deafening when he took the stage but, within minutes, protesters became the main event.

Two young white men were ushered out by police as Mr Trump shouted "Get 'em out!" They wore T-shirts that read "Muslim doctors save lives in Cleveland" - a reference to Mr Trump's call for a temporary ban on Muslims entering the US.

Dr Sejal Danawala speaks of her opposition to Donald Trump

Outside the hall, Dr Sejal Danawala, 28, a resident physician at Cleveland's University Hospital, wore the same shirt, although she is not a Muslim, and carried a sign that said, "Build a wall around Trump and I'll pay for it."

"His campaign is based on fear and hate and prejudice and discrimination," she said. "That's just not something that I support, especially as a woman of colour. I feel it's dangerous for this country."

Mr Trump took shot after shot at other candidates, especially the Democrat he will have to face in November. But he saved a withering attack for Mr Kasich in front of his home state crowd. After questioning his business connections, Mr Trump said: "He's now in favour of the Trans-Pacific Partnership". The remark elicited loud boos. "It is a disaster. It's going to ruin your car industry, totally ruin it," he added. 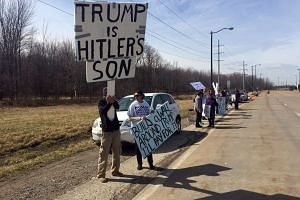 US presidential candidate Donald Trump doubles down despite campaign violence

On the Democratic side, Mrs Clinton and Mr Sanders, like Mr Kasich, played to smaller, more respectful crowds. Among those who turned out to see Mrs Clinton at Cuyahoga Community College in Cleveland was Mr Fa Yeh, 58, who came to the US with the wave of "boat people" from South Vietnam in 1979.

"I would like to see the first woman president," Mr Yeh said, as about 500 supporters shouted "Hillary, Hillary". But no one got angry.

The scene was also orderly at Mr Sanders' campaign office in Lakewood, just west of Cleveland. There, Mr Andrew Nowicki, 21, manned phone lines to get voters out for a man more than triple his age. There was a youthful glint of optimism in his eyes as he spoke of Mr Sanders, 74. "I believe that what Bernie is doing is going to make a profound difference in the world," he said.

Road to the White House