SUTHERLAND SPRINGS (AFP) - Police on Wednesday (Nov 8) officially identified the victims of the mass shooting at a rural Texas church, listing eight children among the dead.

The announcement came as US Vice President Mike Pence was headed to the grieving community of Sutherland Springs to meet with survivors and victims' families. He also planned to attend an evening prayer vigil.

Gunman Devin Patrick Kelley, who had a history of domestic abuse and mental health problems, killed 26 people and wounded 20 others during Sunday (Nov 5) services at First Baptist Church.

The victims ranged in age from one to 77 years old. The unborn child of Crystal Holcombe, who was pregnant, was listed among the dead.

Multiple members of families perished in the attack, including three generations of the Holcombe family - one-year-old Noah Holcombe the youngest among them.

Survivors told US media that the gunman entered the church with his assault rifle and methodically targeted parishioners, some of whom recognised him as the son-in-law of one of their own. 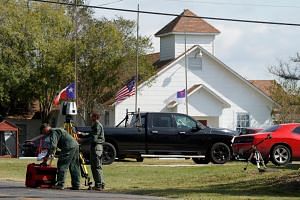 Roseanne Solis, who was wounded but survived, described the attack to the San Antonio Express-News. She said she and other parishioners cowered under pews as the gunman sprayed bullets inside.

At one point, she heard a boy screaming for his mother when the shooting paused, but there was no response. The shooting then resumed.

"I knew if I moved I was going to die," the 57-year-old told the newspaper. "I feel guilty that I survived and all these little children didn't have a chance."

Kelley died of a self-inflicted gunshot wound to the head following a brief car chase with two men who were hailed as heroes for confronting Kelley. One of the men shot and wounded Kelley outside the church.

The mass shooting once again brought the issue of gun violence to the forefront of American politics, and prompted renewed calls for stricter gun control measures.

"We must begin the process of dealing with gun violence, and we must do it today," Texas state legislator Nicole Collier said at a news conference at the state capital Austin.

The Democrat called for immediate hearings to address the issue in the Lone Star state, which has some of the most permissive gun laws in the country.