A missing rolling staircase and a crude insult may have hogged the headlines, but analysts in Washington have stressed that the substance of US President Barack Obama's final trip to Asia still shone through.

Asia watchers here dismissed the minor flaps as distractions that did not ultimately prevent the US leader from making progress on his Asia rebalance.

Especially significant was the message Mr Obama took with him: At a time when the US is consumed by its domestic politics, he was willing to pursue a one-man mission of advocating for a focus on Asia.

"I don't read much into the stairs issue or other hiccups," said Mr Gregory Poling, director of the Asia Maritime Transparency Initiative at the Centre for Strategic and International Studies. "The US commitment to Asia as the most important region of the world for US national interests goes well beyond President Obama; recognising that and articulating it as a central plank of foreign policy will be the legacy of the rebalance."

Agreeing, Ms Shihoko Goto, senior North-east Asia associate at the Woodrow Wilson Centre, said: "The most significant step was that he has taken ownership of the rebalance to Asia as he wraps up his presidency.

"One of the biggest criticisms of the rebalance has been that it has been de facto a military strategy, but Obama has made clear that it is a comprehensive one that includes economic development as well as promoting values such as free market principles and democracy."

At each stop of his Asia visit, Mr Obama had critical policy achievements to announce but also public relations crises to handle.

In China, Mr Obama and his Chinese counterpart Xi Jinping formally joined the Paris climate agreement, but the US President also had to urge reporters not to make too much about the fact that there was no staircase rolled out to greet Air Force One when it landed.

In Laos, he pledged US$90 million (S$121 million) to clear unexploded bombs dropped by the US during the Vietnam war, and reaffirmed its role in the South China Sea.

"The United States will stand with allies and partners in upholding fundamental interests, among them the freedom of navigation and overflight, lawful commerce that is not impeded, and peaceful resolution of disputes," he said.

Yet, that part of the leg was marred by tension surrounding Philippine President Rodrigo Duterte's foul-mouthed jibe.

Both episodes quickly made their way on to the campaign trail back in the US with Republican nominee Donald Trump using it to accuse Mr Obama of failing to show strength. 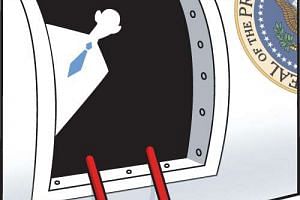 And while there is some consensus that the visit is actually more substantive than the focus on atmospherics would let on, analysts 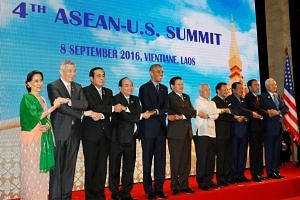 South-east Asia will be a large part of Obama's legacy: The Nation 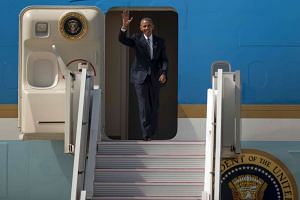 Barack Obama to visit China and Laos: A look back at his 10 previous trips to Asia as US president

US-China ties will continue to be plagued by the many disagreements between the two sides for the foreseeable future. Both sides continued to clash over the South China Sea territorial disputes at the recently concluded East Asia Summit. Mr Obama made a point of making the issue a key focus of his remarks at the meeting, taking a harder line against China's activities than what emerged in the joint statement.

Meanwhile, the US relationship with the Philippines has also now come under fresh scrutiny.

State Department deputy spokesman Mark Toner stressed that the unfortunate episode would not undermine ties, but he also raised concerns about the "tenor" of the Duterte administration.

"What's clear is that there has been a pattern here or a couple of incidents that, again, speak to the tenor of the new administration that, frankly, raise concerns. But that doesn't undermine the fact that we have had 70 years of strong bilateral relations with the Philippines and we want to see that continue," he said.

Then there is the continuing uncertainty over the Trans-Pacific Partnership free trade deal that has been hailed as an integral component of the US pivot.

At the heart of the concern is whether the next US president will face these challenges with the same commitment Mr Obama has shown.

"President Obama has shown why we must rebalance to the region, but the fact that even he faces headwinds could easily discourage a less experienced leader," said Dr Patrick Cronin of Centre for a New American Security.

"The rapid pace of change and competition in the region means that every day the US fails to seize the opportunities and manage the challenges in the region is magnified in effect. Our position is fundamentally sound and our potential tremendous. But American strategic influence once lost will be difficult to regain."