WASHINGTON (AFP) - US President Barack Obama acclaimed his outgoing administration's accomplishments on Thursday (Jan 5) in a letter to the American people defending a legacy on health care and other issues that his successor Donald Trump has vowed to dismantle.

The White House released the president's letter along with reports from each of his Cabinet secretaries describing the progress made since Mr Obama took office eight years ago with the world's largest economy spiralling towards depression.

"As I prepare to pass the baton and do my part as a private citizen, I'm proud to say that we have laid a new foundation for America," he said.

He cited the turn-around in the US economy, the scaled back military operations in Afghanistan and Iraq, a sharply reduced dependence on foreign oil, and the Paris climate agreement as among his administration's important accomplishments.

But near the top of his list was the Affordable Care Act, the signature health care reform that Democrat Obama prizes and Republican Trump has vowed to ditch.

Mr Obama has launched a parting offensive to try to save it, making a rare visit to Congress on Wednesday (Jan 5) to rally Democrats for what is shaping up as the first major fight of the next administration. 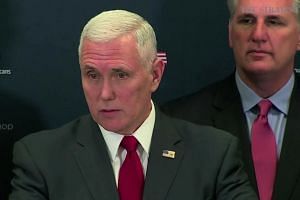 Vice President-elect Mike Pence made his own trip to Capitol Hill to strategise with Republicans, who control the House and Senate and will have the White House as well once Mr Trump takes office on Jan 20.

"The first order of business is to repeal and replace Obamacare," Mr Pence told reporters in the US Capitol shortly after meeting with House Republicans.

Mr Trump himself has cautioned against over-hasty action.

"Republicans must be careful in that the Dems own the failed ObamaCare disaster," the president-elect said on Twitter, warning Republicans to allow it to "fall of its own weight".

In his letter, Mr Obama argued that the US has "begun the long task of reversing inequality".

"What won't help is taking health care away from 30 million Americans, most of them white and working class; denying overtime pay to workers, most of whom have more than earned it; or privatizing Medicare and Social Security and letting Wall Street regulate itself again - none of which middle-class Americans voted for."

Mr Obama's reforms came under fire during the US presidential campaign as insurance premiums rose and some major insurers backed out of the state markets created under the law.

But elements of Obamacare remain popular, notably the provisions barring companies from refusing coverage due to pre-existing conditions and allowing children to retain coverage on family plans through to 26 years of age.