For 20 years, Dr Eric Sanderson, 50, has been one of many millions who each day use the subway trains that thunder, rumble and screech along 24 lines linking New York City's schools, businesses as well as residential and recreation areas.

And he has seen the subway's steady deterioration.

So have Mr Aman Khosla, 30, and Mr J.P. Bouvet, 27. Friends and musicians who often collaborate, they have been living in the city for some five years and have learnt to adapt to the uncertainty of the subway.

"Seldom does a week pass when you don't have some kind of problem using the subway," Mr Bouvet said as the duo chatted outside Court Square station in Queens - just one stop from Manhattan. Mr Khosla added: "For me, it's every time."

Invariably, trains run late, tracks are closed because of repairs or mishaps, stations are closed, and they must work their way around the problem.

Only 65 per cent of weekday trains reach their destinations on time - the worst performance of any major transit system in the world.

Dr Sanderson's commute from downtown to his home in the Bronx can sometimes take 1½ hours. Almost every time he sets foot in a subway train, there is some delay.

The system is now more than 110 years old, and it shows. A significant number of delays are officially attributed to overcrowding. The city is far bigger than it was a century ago. Today, its population is 8.5 million - and it is still growing. Daily rides have doubled in the past two decades to 5.8 million today.

"It's one of the oldest (subways) in the world, and it is in dire need of upgrading," Dr Henry Petroski, a professor at Duke University and author of several books on the United States' infrastructure, told The Sunday Times over the phone.

Part of the problem is chronic underfunding. A New York Times report last year calculated that, in 1990, the city gave the Metropolitan Transportation Authority (MTA) about US$1 billion in today's dollars (about S$1.3 billion) for operations. Last year, it gave US$250 million.

The problems are compounded by a peculiarity of the New York system. "The bedrock is very close to the surface in Manhattan, almost everywhere the subway had to be drilled out of the rock," explained Dr Sanderson, who works with the Wildlife Conservation Society and ran its 10-year Mannahatta Project, which drew from old maps and historical data to get a detailed rendition of what Manhattan island used to be like up to 400 years ago.

"Historically, when it rained or snowed, the water would have gone into the soil and hit the bedrock and run along the contours and come out in springs or ponds," he said in an interview over coffee in the cavernous main concourse of Grand Central station. "Once upon a time, Manhattan had 66 miles of streams, 300 springs and 21 ponds.

"Whenever you are riding the New York subway, there is water everywhere. It's more complicated today because we have water pipes and steam pipes and, even though they try to maintain them as best as they can, they leak."

On a normal dry day, 49 million litres of water are pumped out of the system. It has been estimated that if the power supply were to suffer a massive failure, it would take less than an hour for most lines to be flooded; in 36 hours, the entire subway system would be full of water.

The problem is apparent as rush-hour commuters move to avoid the yellow buckets often put out to catch water dripping from the roofs and walls. Steel has corroded, wall surfaces are crumbling, and wiring and signals gear has deteriorated. 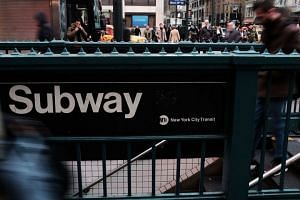 Lessons for MRT from the New York subway

How New York's subways ran aground

"What happens when a hair dryer that is plugged into the wall falls into the bathtub?" MTA chairman Joseph Lhota said to The New York Times. "Getting the system wet is one thing; having it sit in a puddle is another."

The American Society of Civil Engineers, in its 2017 report card on US infrastructure which gave the transit systems a D-minus grade, said: "Several of the older heavy rail systems, including in Washington, New York and San Francisco, are confronting the challenges and consequences of rider demand, years of deferred maintenance, and chronic funding problems."

Last year, New York Governor Andrew Cuomo pledged that more than US$800 million would be invested in a subway emergency plan to turn around the creaking system. But it is not clear yet if US President Donald Trump's US$1.5 trillion infrastructure investment proposal unveiled just weeks ago will be passed by Congress and, if so, how much will be allocated to the New York City Subway.

There is a growing sense of urgency over the subway's chronic problems. Last Monday, signal failures and other issues - a water bottle thrown onto a track, as well as police searching for a man with a gun - created cascading delays, causing thousands of subway commuters to be late for work.

There is little option for commuters but to invoke the vaunted indomitable spirit of New Yorkers.

"Part of becoming a New Yorker is getting good at working out alternative routes," said Mr Bouvet, as he shouldered his bicycle.