While most appointments won't face much opposition, a few can expect tough grilling

For most of the appointments - not just for the Cabinet but spread across government agencies and including ambassadors - the process will be routine, analysts say.

For instance, Mr Trump's latest pick of Mr Mick Mulvaney, 49, for Budget Director is unlikely to face much opposition. Neither will Mr Terry Branstad, 70, nor Mrs Nikki Haley, 44, nominated ambassador to China and the United Nations respectively.

But a handful of others may face tough grilling. They include Mr Rex Tillerson, 64, CEO of ExxonMobil, who will face questions over his ties with Russian President Vladimir Putin, especially in an atmosphere vitiated by allegations of Russian hacking to influence last month's presidential election, which have made even some Republicans very uneasy.

Mr David Friedman, nominated as ambassador to Israel, signifies a potentially radical shift to the right in the US' Israel policy and may also run into opposition. 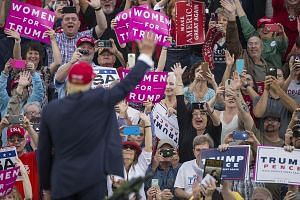 The 71-year-old wants to move the US Embassy from Tel Aviv to Jerusalem. The shift could symbolise the end of the idea of the "two state" - Israel and Palestine - solution, inflaming Palestinian and Arab public opinion. In his writings, Mr Friedman has compared liberal American Jews to "kapos" - Jews who aided Nazis during the Holocaust. His nomination has sparked strident debate in the Israeli media.

Former Goldman Sachs banker Steve Mnuchin, 53, nominated for Treasury Secretary, may face ordinary people, called in to testify before the committee, who lost their homes to banks in the 2010 subprime crisis that triggered a global recession.

In 2009, he led a group of investors who bought a failed California- based bank. Renaming it OneWest, it became a "foreclosure machine", according to the California Reinvestment Coalition (CRC), a group focusing on housing rights.

The advocacy group also does not want Dr Ben Carson, 65, as Housing and Urban Development Secretary, saying in a statement that given his view of affirmative fair housing as a "failed experiment", he could "jeopardise protections put in place to undo historical and deeply entrenched and systemic housing discrimination".

Mr Scott Pruitt, 48, Mr Trump's nominee to head the Environmental Protection Agency (EPA), has a track record as attorney-general of Oklahoma of suing the EPA to fend off federal regulations on the fossil fuel industry.

Powerful environmental groups like the Sierra Club have already pledged to campaign against his appointment - and to tie up in lawsuits any attempt of his to gut environmental regulations.

The confirmation process is robust. A nomination is given to the relevant Senate committee, which holds hearings - studying the candidate's background, including three years of tax records, and hearing testimony - and votes on the nominee.

If the committee votes to move the nomination to the next step, the full Senate will then vote on the nominee. If 51 of the 100 senators vote in support, then that nominee is confirmed.

Republicans have 52 seats in the 100-seat Senate, so on paper pushing through Mr Trump's nominees will not be an issue at the full vote if they stick together.

The Republicans' wealthy political class has vested interests as well in some of Mr Trump's agenda, especially deregulation.

But Russia, Israel and housing are emotive issues, and public opinion is a factor. "The importance of the position, the qualifications of the nominee and the prevailing political climate influence the character of the Senate's response to each nomination," the Senate says on its website.

"Just as the President is not required to explain why he selected a particular nominee, neither is the Senate obligated to give reasons for rejecting a nominee."

Yet, there is the tradition of giving a new incoming president wide latitude to pick his Cabinet, with party members, despite misgivings, coalescing around his choices.