NEW YORK (BLOOMBERG) - The Securities and Exchange Commission is investigating whether Nissan Motor Co accurately disclosed its executive pay in the US, according to several people familiar with the matter, compounding the car-maker's woes as it grapples with the aftermath of former chairman Carlos Ghosn's arrest.

The US financial regulator is examining whether Nissan's executive pay disclosures were accurate and whether the car-maker had adequate controls to prevent improper payments, the people said, asking not to be identified because the probe hasn't been disclosed publicly.

Nissan, in response to questions, confirmed it has received an inquiry and said it's cooperating fully.

Through a spokeswoman, Ms Kristina Adamski, the company said it could not provide further details. Nissan shares fell 0.8 per cent in Tokyo trading, their biggest decline in three weeks.

The SEC investigation adds to scrutiny surrounding Japan's second-largest automaker and its executives after Japanese authorities arrested Ghosn and another company director, Greg Kelly, in November.

Both men were indicted there over allegations Ghosn under-reported his income at Nissan by tens of millions of dollars.

The car-maker - whose largest shareholder is French alliance partner Renault SA - also has been indicted, a step that allows prosecutors in Japan to lay formal charges. 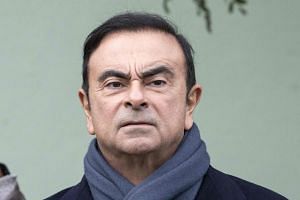 Ghosn may have had questionable ethics, says co-chair of external Nissan probe

Ghosn and Kelly were arrested after a months-long internal investigation at Nissan uncovered what the company said were financial misdeeds by Ghosn. Both men deny wrongdoing.

The SEC inquiry, launched out of its Washington headquarters, is focused on whether lapses by Nissan in reporting on its executives' pay violated US securities law, one of the people said. The regulator's work was slowed by more than a month of partial US government shutdown, another said.

While the SEC's civil inquiry is in its early stages and may not point to wrongdoing, it adds a layer of complexity for Nissan and the two former executives.

The SEC, which often works closely with law enforcement, could seek financial penalties and injunctions to prevent violations of laws or SEC rules.

Mr John Nester, a spokesman for the SEC, declined to comment.

Mr Aubrey Harwell Jr, an attorney for Kelly, said his client hasn't received an SEC subpoena and declined further comment. US- and Japan-based representatives for Ghosn declined to comment.

In a memo to staff last month, Nissan Chief Executive Officer Hiroto Saikawa, who succeeded Ghosn as CEO, said oversights in the company's corporate governance "permitted the situation to continue, which clearly calls for grave reflection".

Nissan shares trade in the US via American Depository Receipts, which generally gives the SEC enforcement authority.

US courts have disagreed about whether the regulator has jurisdiction in certain cases where wrongdoing occurred abroad.

The activities under scrutiny at Nissan to date took place mostly in Japan and Europe. But the SEC believes it has authority in this instance, according to one of the people familiar with the matter.

Ghosn, who gained near-mythic status in the auto business for rescuing Nissan and forging a global alliance between it and Renault, also was indicted in relation to a decision to temporarily transfer personal trading losses to Nissan. He remains in custody.

Meanwhile, signs of discord are emerging between the two countries where the scandal is playing out.

French President Emmanuel Macron, whose government is the most powerful shareholder in Renault, told Japanese Prime Minister Shinzo Abe on Friday that he's worried about Ghosn's conditions in jail, making his strongest comments yet on the fallen car titan and the scandal that has rocked the two-decade old alliance.

Japan's Chief Cabinet Secretary Yoshihide Suga said on Monday that due process is being followed in Ghosn's detention and investigation.

Kelly, the only American on Nissan's board, was known inside the company as the "CEO whisperer" for his close ties to Ghosn during his leadership tenure. A Tennessee resident, Kelly was released on bail last month but must remain in Japan pending trial as a condition of his release.