PARKLAND, FLORIDA - The suspect in one of the deadliest school shootings in modern US history confessed to police that he "began shooting students that he saw in the hallways and on school grounds" once on campus, according to a police arrest report released Thursday (Feb 15).

He arrived at Marjory Stoneman Douglas High School in Parkland at 2.19 pm on Wednesday and pulled out a semi-automatic AR-15 rifle, according to details described by the authorities at a news conference Thursday.

Cruz shot people in the hallways and inside five classrooms on the first and second floors of the freshman building.

He eventually discarded the rifle, a vest and ammunition in a stairwell, blended in with fleeing students and got away, authorities said.

After leaving the school, Cruz walked to a Walmart, and bought a drink at a Subway.

He also stopped at a McDonald's.

He was arrested by police without incident as he walked down a residential street at 3.41 pm.

"He looked like a typical high school student, and for a quick moment I thought, could this be the person who I need to stop?" Officer Michael Leonard said.

Cruz faces 17 counts of premeditated murder - one for each of the people he is accused of killing Wednesday in a shooting that was captured on cellphone video by terrified students.

He is being held without bond at the main Broward County jail, where he has been placed on suicide watch, according to Gordon Weekes, the county's chief assistant public defender.

The AR-15 rifle used in the attack was purchased legally, at Sunrise Tactical Supply in Florida, according to a federal law enforcement official.

The arrest report said Cruz purchased it in February 2017.

"No laws were violated in the procurement of this weapon," said Peter J Forcelli, the special agent in charge for the Bureau of Alcohol, Tobacco, Firearms and Explosives in Miami.

The FBI said Thursday it received information last year about a comment made on a YouTube channel which has been attributed to the gunman, but was unable to identify the person.

A huge crowd gathered at Pine Trails Park in Parkland for an emotional vigil to commemorate the victims, 14 of whom were students.

The football team gathered separately nearby, forming a circle and locking hands before praying for a coach and an athletic director who were killed.

Among them was a popular football coach and a geography teacher credited with saving a boy's life when he stood in front of a classroom door.

The coach, Aaron Feis, was seen as someone who looked out for students who got in trouble, those who were struggling, those without fathers at home.

"He'd go out of his way to help anybody," said Feis' grandfather, Raymond.

CRUZ MADE HIS FIRST COURT APPEARANCE, CLAD IN AN ORANGE JAIL JUMPSUIT

Shackled around his hands, feet and waist, Cruz was asked if he understood the circumstances. "Yes, ma'am," he whispered.

"He is fully aware of what is going on, and he's just a broken human being."

Weekes said the lawyers were still trying to piece together the details of Cruz's life.

Cruz has a "significant" history of mental illness, according to Weekes, and is possibly autistic or has a learning disability.

But Weekes was not yet ready to say whether he would pursue a mental health defense.

"There's no question of whether he will be convicted of capital murder 17 times," he said.

"When we let one of our children fall off grid, when they are screaming for help in every way, do we have the right to kill them when we could have stopped it?"

Ben Bennight, a bail bondsman in Mississippi, said in an interview that he reported a suspicious comment left on his YouTube channel last fall by a user named "nikolas cruz."

"I'm going to be a professional school shooter," the Sept 24 comment said. 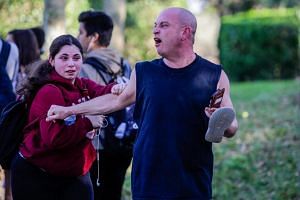 Bennight said he then left a voicemail message at his local FBI field office alerting it to the comment.

Bennight, 36, said that when he originally reported the comments to the FBI, a pair of agents interviewed him the next morning.

Bennight said two FBI agents visited him a few hours after the shooting Wednesday, spending about 15 to 20 minutes with him.

The agents told him they thought the person who posted on his channel might be connected to the Florida shooting because they had the same name.

The FBI on Thursday released a statement that said it received information about a comment made on a YouTube channel in September 2017.

"No other information was included in the comment which would indicate a particular time, location, or the true identity of the person who posted the comment," the statement said.

The FBI said it conducted database reviews and other checks, but was unable to further identify the person who posted the comment.

Bennight did not fault the FBI, he said.

"We live in a country where you can't just lock people away for saying something," he said. "You can't just stuff somebody in a black hole because they said something that makes you uncomfortable. I believe the FBI took it seriously. I hope that they followed up."

Two Instagram accounts that classmates said belonged to Cruz were filled with images of weaponry, as well as the hats and bandannas he liked to wear to school.

Among more innocuous pictures of animals, including a dog and a gecko, was a picture of a slaughtered toad.

In response to a comment on that image, Cruz wrote that toads tended to run away when they saw him, because "I killed a lot of them."

"I went on a massacre of these things once," he wrote.

Other posts on the first account, like one captioned "arsenal," showcased collections of firearms, including what appears to be a Savage Axis bolt-action rifle, a Smith and Wesson M&P15-series rifle, and at least two shotguns.

Another picture showed a box containing rifle cartridges for an AR-15 or other similar weapons.

'THE SHOTS WERE SOMETHING I'LL NEVER FORGET'

Moises Lobaton, a senior, was in psychology class when gunfire boomed. The students scurried to try to hide as far away from the door as possible.

"There wasn't enough space behind the desk, so not all of the kids could fit," he said.

Shots shattered a glass window on the door, injuring at least three of his classmates, including a girl who "wasn't moving at all."

"She was next to a pool of blood, but I couldn't tell if it was hers or the guy next to hers," he said. The boy had been shot in the arm and was bleeding profusely. His classmates wrapped the arm in cloth.

"The shots were something I'll never forget. It sounded like bombs going off, one at a time," he said.

In New York, two students were arrested after threatening on social media to 'gun down' their Brooklyn high school, police said.

Cole Carlberg, 16, turned himself in, and the police picked up Joshua Schechter, 16, after receiving a 911 call at about 9 am Thursday.

Both were charged with making terroristic threats, aggravated harassment and criminal possession of a weapon, a New York police sergeant, Brendan Ryan, said.

On Wednesday, the teenagers had posted on Snapchat that they had planned to shoot up Brooklyn Prospect Charter School on Fort Hamilton Parkway, Ryan said, adding that the school contacted parents about the threat.

One of the teenagers had an "air pistol rifle" that Ryan described as a pellet or BB gun, but said it was unclear who owned it.