WASHINGTON - An Act that is seen as a significant indication of bipartisan support for deepening US engagement in the Indo-Pacific region is quietly making its way through Congress amid Washington's daily diet of political drama.

The Asia Reassurance Initiative Act (Aria), which was passed by the Senate on Dec 4, is being closely watched by the Asia policy community and Asian diplomats. The House is due to vote on it within days.

The legislation in effect lays down a policy framework to support the United States' commitment to a "free and open Indo-Pacific region and the rules-based international order", according to Republican Senator Cory Gardner of Colorado, who sponsored the Bill.

It authorises US$1.5 billion (S$2 billion) to be appropriated every year for the next five years to fund the activities outlined, including military, diplomatic and economic engagement and assistance, which has thus far been seen as anaemic. And it recommits the US to every treaty or alliance in the Asia Pacific.

"Washington wants to send a clear signal to Asia that the United States will remain an effective, respectful ally and partner," Dr Patrick Cronin, senior director at the Centre for a New American Security (CNAS), told The Straits Times.

"Money has its limits, but this proposed five-year funding programme would help lubricate our regional diplomacy at a time when so many friends in the region are urging greater US engagement."

"With House support, this legislation provides another tool to support regional states as they seek to strengthen the software and hardware of national security," he added.

Certainly, the Aria is in the context of the US' mounting strategic competition with China. It mentions Taiwan, saying the US should make regular arms sales to Taiwan tailored to countering threats from China, including supporting Taiwan to develop "asymmetric capability", and that the US should encourage the travel of high-level Taiwan officials to the US.

"It's another component to the great power rivalry with China," said Ms Yun Sun, director of the China Programme at the Stimson Centre. "It's more resources for the relationship between US and its partners in the region." 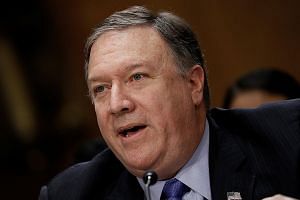 Mike Pompeo announces $154m in US initiatives for Indo-Pacific

Bipartisan support for a more robust posture to compete with China, was by itself significant in post midterm election America, she added.

But while making specific reference to China, North Korea and the Islamic State in Iraq and Syria, saying "core tenets of the United States-backed international system are being challenged", Aria is also very broad, covering relations with countries and regions from India to Asean, to the Korean peninsula and Japan, and support for issues from democracy to cyber security to maritime security.

It recognises the links between environmental security and maritime security, and focuses on actions to disrupt illicit networks at sea and across Asia where there is rampant trafficking in humans, drugs and illegal fish, notes Ms Sally Yozell, a senior fellow and director of the Environmental Security programme at the Stimson Centre.

Co-sponsor, Democratic Senator Ed Markey of Massachusetts, said Aria would "do important work to address challenges in the Indo-Pacific by authorising much-needed funds to promote democracy and strengthen civil society, the rule of law, transparency, and accountability".

The Aria does not appropriate funds, but authorises their appropriation. The actual appropriations come in subsequent Congressional budgets.

"Success should therefore be judged not in the sole passage of the legislation but in the prioritisation for the region that we will see in Congressional budgets for 2019, 2020, and beyond," said Mr Eric Sayers, senior adjunct fellow for the Defence Programme at CNAS.

"The strength of this legislation doesn't lie in the text, but the recognition that a bipartisan group of senior Senators… are coming together to say the Indo-Pacific should be a top priority and that they are committed to working with their colleagues to see that vision translated into a shift in appropriations for the State Department budget," he said.

Some say what Aria specifies and authorises, is spread thin.

"It's a decent start to more proactively competing for US interests in the Indo-Pacific," said Dr Sameer Lalwani, senior fellow, Asia Strategy and South Asia director at the Stimson Centre. But "it still appears overly reliant on military tools, short on actual resourcing, and spread a mile wide and an inch deep".

"The appropriation of US$1.5 billion is better than nothing but spread across dozens of countries in the Indo-Pacific is far less than what is required," he said.

But if the House passes it - and there is little reason why it should not - it is without doubt a significant policy development.

Under the Barack Obama administration, there was a big rhetorical commitment to the Asia Pacific or Indo Pacific region, but the US "just flat out did not readjust our resources in a way that actually backed that up", said Dr Lindsey Ford, Director of Political-Security Affairs for the Asia Society Policy Institute.

The Aria marks an important start to rectifying that, she said.

"The Aria… if passed, would be probably one of the most consequential pieces of funding legislation that has to do with Asia, that US Congress would have passed in years," Dr Ford told ST.

"And it puts a really strong emphasis where it should, which is how does the US work more closely and strengthen the relationship with our allies and partners."