NEW YORK (NYTIMES) - A 19-year-old woman charged, in a lawsuit filed last Tuesday (Sept 4), that three principal dancers at New York City Ballet, one of whom she had been dating, texted one another sexually explicit photos and short videos of her that were taken without her knowledge or consent.

The woman, Ms Alexandra Waterbury, filed suit in the state Supreme Court in Manhattan against the company and her former boyfriend, Mr Chase Finlay, who had been a principal dancer at the New York City Ballet until last month when he resigned after the company sought to question him about her allegations.

The company, at the same time, suspended two other principal dancers - Mr Amar Ramasar and Mr Zachary Catazaro - without pay until next year, saying they had violated unspecified "norms of conduct". In her lawsuit, Ms Waterbury accuses them of exchanging sexual photos with Mr Finlay.

Ms Waterbury, who studied from 2013 to 2016 at the academy affiliated with the company, the School of American Ballet, blames the company in her suit for condoning a "fraternity-like atmosphere" that "permeates the Ballet and its dancers and emboldens them to disregard the law and violate the basic rights of women".

As an example, the lawsuit says that the company was aware that Mr Finlay had caused extensive damage to his hotel room in Washington after hosting a party there this year.

Mr Charles Scharf, the chairman of the board at City Ballet, said in a statement that the company had not condoned any of the behaviour mentioned and that it "has no liability for the actions specified in the complaint and has taken the appropriate disciplinary actions for the dancers involved".

Ms Waterbury's lawsuit says that she was not alone in being victimised and that nude photos of other dancers were also shared on the text-chain, often accompanied by lewd and misogynistic language.

The suit says a donor wrote to Mr Finlay about his desire to "violate" dancers at another company and added, "I bet we could tie some of them up and abuse them like farm animals". It said Mr Finlay replied "or like the sluts they are".

A lawyer for Mr Finlay, Mr Ira Kleiman, said that he had no comment.

Ms Waterbury said she discovered the texts this spring, when Mr Finlay gave her the password to his laptop so she could check her e-mail - and "all of the text messages just popped up".

"My initial feelings of shock and denial have turned into anger and embarrassment," Ms Waterbury said at a news conference last Wednesday at the office of her lawyer, Mr Jordan Merson.

She has not gone to the police with her allegations but is still considering the option, Mr Merson said. Her lawsuit is the latest incident to rock City Ballet, which is perhaps the nation's pre-eminent dance company.

Its longtime ballet-master in chief, Mr Peter Martins, abruptly retired this year after the company began investigating allegations of physical and sexual abuse that were made against him. The company said it did not corroborate the accusations. 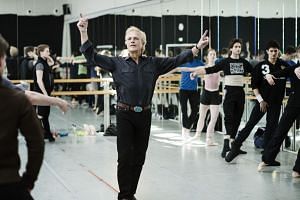 Waterbury's lawsuit said that the company's failure to corroborate the accusations against Mr Martins sent the message to Mr Finlay and other male dancers that it was acceptable "to abuse substances and degrade, demean, dehumanise and sexually abuse women".

Mr Scharf's statement said that "New York City Ballet is confident that there is no basis for this lawsuit, and vehemently denies the allegations that the company has condoned, encouraged, or fostered the kind of activity that Mr Finlay and the others named have participated in, which were off-hours activities that were not known, approved, or facilitated by NYCB".

He said that after the company learned of the allegations from Mr Merson in June, "we investigated them and found that the actions had violated the Company's norms of conduct, and immediate and appropriate action was taken". Mr Scharf said that Mr Merson had contacted City Ballet "to try to negotiate a payment from the company to settle the matter to avoid adverse publicity" but that the company had "refused the demand".

The texts apparently began last year, Ms Waterbury's lawsuit says, when Mr Finlay sent out a nude photograph of her and asked the other men if they had "any picture of girls" they had sex with, promising to send them pictures of "ballerina girls I've made scream".

The lawsuit said that he shared nude photos of Ms Waterbury with former students and others affiliated with the company, including an unnamed man identified as a donor. The suit says Mr Finlay, Mr Catazaro and Mr Ramasar exchanged nude photos of women.

The lawsuit says that the images of Ms Waterbury were taken surreptitiously but does not identify how that occurred. Mr Catazaro and Mr Ramasar could not be immediately reached for comment last Wednesday. Ms Waterbury, a model and dancer who is now a student at the School of General Studies at Columbia, said the incident had left her in fear.

After The New York Times reported last month that Mr Finlay had resigned and Mr Ramasar and Mr Catazaro had been suspended, she said she had "received threats from random people telling me I had enemies now and how I am a job-ruiner".

And she said that she worried for young girls who want to be ballerinas when they grow up. "Every time I see a little girl in a tutu or with her hair in a bun on her way to ballet class, all I can think is that she should run in the other direction," she said, "because no one will protect her, like no one protected me."