NEW YORK (REUTERS) - New York City is bracing for a security threat like never before given the potential for retaliation from Iran after a US air strike in Baghdad on Friday (Jan 3) killed Teheran's most prominent military commander, Mayor Bill de Blasio said.

The city is constantly vigilant against possible terrorist attacks given its history, but de Blasio said the threat changed significantly overnight considering the resources of a modern, major nation such as Iran compared to those of non-state organisations like Al-Qaeda or Islamic State in Iraq and Syria (ISIS).

"We have never confronted in recent decades the reality of a war with a government of a large country with an international terror network at its behest," the mayor told a news conference.

"New Yorkers deserve to know that we have entered into a different reality," he said.

While stressing there was no specific, credible threat at this time, Police Commissioner Dermot Shea said officers were on "heightened vigilance" and New Yorkers could expect to see more uniformed officers, some heavily armed with long guns, at sensitive areas.

Greater security is typically seen on the subway, other mass transit, and tourist attractions at times of heightened alert.

New York has been the target of repeated attacks on civilians, including the destruction of the World Trade Center on Sept 11, 2001, and failed attempts such as a truck bomb that did not explode in Times Square or a plot to bomb the subway that police thwarted.

In response, the NYPD has built intelligence and counterterrorism divisions, posting officers in 14 foreign locations.

But the escalation of tensions with Iran meant "a world of difference" and "we have to assume this action puts us in a de facto state of war," the mayor said.

Iranian proxies such as Hezbollah have previously scouted New York locations for an attack, he said. 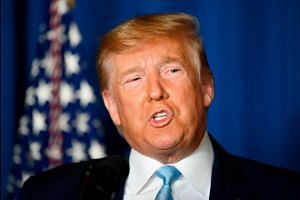 "With Iran, you see a state sponsor that has organised proxies such as Hezbollah and other militias that then sub out to third proxies," said John Miller, deputy police commissioner for intelligence and counterterrorism.

Other US cities were also taking precautions.

Los Angeles police asked people to remain on alert and said they were monitoring events in Iran.

Chad Wolf, the acting secretary of the US Department of Homeland Security, said in a statement on Friday that his agency was working with law enforcement officials and others across the country and was ready to respond to any threats, though none had yet been detected.