US President Donald Trump's hardball approach with the European Union on trade appeared to pay off when he announced trade concessions from the EU and a "new phase in the relationship".

Though details were not clear, the upbeat announcement on Wednesday was seen as averting a US-EU trade war, and putting the transatlantic alliance back on a firm footing after weeks of uncertainty; only recently had Mr Trump called the EU a "foe" on trade.

It may also take some domestic pressure off Mr Trump, whose agricultural base is hurting from China's retaliatory tariffs following US tariffs imposed on China.

"We want to further strengthen this trade relationship to the benefit of all American and European citizens," Mr Trump said.

He also tweeted: "Great to be back on track with the European Union. This was a big day for free and fair trade!"

Most analysts cheered the detente of sorts.

Dr Patrick Cronin, senior director for the Asia-Pacific programme at the Centre for a New American Security, told The Straits Times: "Europe and the United States are back on the same team with respect to free and fair trade. This should reassure allies and partners in Asia too."

Ms Kellie Meiman Hock, managing partner of trade and business consultancy McLarty Associates, said: "It is positive that we can get the transatlantic relationship back on track."

However, given the broadness of the deal, some analysts reacted with caution.

Dr Steve Peers, professor of human rights and world trade law at the University of Essex in Britain, tweeted: "At first sight, (it) looks to me like an agreement mainly to have further talks, with an implied standstill on any escalation of trade disputes."

Under the deal, the US and the EU will work together towards zero tariffs, zero non-tariff barriers and zero subsidies on non-auto industrial goods.

French Finance Minister Bruno Le Maire yesterday said France has asked for clarifications on those measures agreed during the meeting, reported Agence France-Presse. "A good trade discussion can only take place on clear grounds and cannot move forward under pressure," Mr Le Maire said, reiterating that it would be impossible to negotiate an over-reaching deal covering all trade between the US and Europe.

German Economy Minister Peter Altmaier, meanwhile, hailed the talks as a breakthrough that could avoid a trade war and save millions of jobs.

Mr Trump called it part of "strategic cooperation on energy".

That European countries had made a deal to buy Russian natural gas through the Nord Stream 2 pipeline had caused some unease, with Mr Trump earlier this month berating Nato, and in particular Germany, for ceding energy independence to Russia.

Many analysts said he had a point.

The President is also under pressure on another front at home - his agricultural base. 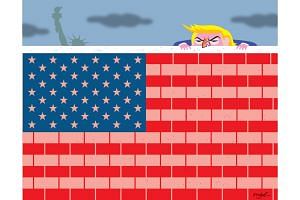 As US retreats from free trade, the EU and others speed ahead

Has US-EU trade war been averted? Not yet, but new deal puts brakes on escalating tension

US and EU refuse to back down on trade demands

Farmers have been suffering from China's retaliatory tariffs on soya beans, and the EU's pledge to buy more soya beans could partly address that.

On Tuesday, the White House announced US$12 billion (S$16.3 billion) worth of aid for farmers affected by retaliatory tariffs.

But the move is controversial.

A former chief economist of the US Department of Agriculture told CNBC that the aid plan could potentially be in violation of World Trade Organisation rules against subsidies.

The plan was criticised by some Republican lawmakers as well, who called it a taxpayer-funded bailout.

Republican Senator Pat Toomey of Pennsylvania told MSNBC: "We are compounding government errors. It was a failed government policy in the first place in the form of these unnecessary tariffs that are doing the damage, and now we are forcing taxpayers to send a cheque."