WASHINGTON (BLOOMBERG) - The US Supreme Court turned away an appeal connected to Special Counsel Robert Mueller's now-completed investigation, rejecting arguments from a mystery company that was trying to avoid having to turn over information to a grand jury.

The justices, without explanation, left intact a federal appeals court ruling that said the company, owned by an unidentified foreign government, had to comply with a subpoena.

The ongoing significance of the subpoena fight isn't clear now that Mr Mueller has submitted his final report on the investigation to Attorney-General William Barr.

Mr Mueller handed off some aspects of the probe to other federal prosecutors.

The case marked the first known effort to get the Supreme Court to weigh in on Mr Mueller's probe, which centred on Russian meddling with the 2016 election and possible obstruction of justice.

The justices previously refused to block the appeals court ruling while they considered whether to take up the case. 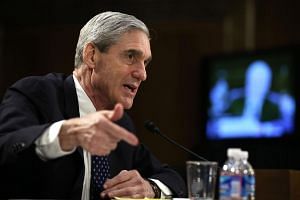 The dispute became a source of intrigue in part because a federal appeals court in Washington closed an entire floor of a courthouse to the public while the case was being argued in December.

The case has been so secret that Mr Mueller's name didn't appear publicly in a Supreme Court document until this month. Court records provide no hints as to what Mr Mueller was seeking.

The company has an American office where the July 2018 subpoena was served. Prosecutors contended the company conducts "considerable business" in the US, according to an appeals court opinion.

At the Supreme Court, the company argued that the 1976 Foreign Sovereign Immunities Act protects foreign governments and entities they own from being dragged into US criminal cases.

The appeal also argued that US courts can't impose sanctions on a foreign sovereign for not complying with a subpoena.

In ruling against the company on a 3-0 vote, the federal appeals court in Washington said the 1976 law, while shielding foreign governments in some contexts, gives American courts authority over them when they are involved in US commercial activity.

Mr Mueller didn't have authority to file briefs at the Supreme Court, but US Solicitor-General Noel Francisco weighed in on the special counsel's behalf and urged the court to reject the appeal.