WASHINGTON (AFP) - Identifying animals and reciting a list of words are among the type of challenges contained in the cognitive fitness test taken by US President Donald Trump.

According to White House doctor Ronny Jackson, Trump scored "exceedingly well" (30 out of 30) on the Montreal Cognitive Assessment and has "no cognitive issues whatsoever". Jackson said Trump himself had requested to sit the test after questions about his mental health.

"I think he saw doing the physical as an opportunity to put some of that to rest," Jackson said. "And I think he wasn't the least bit concerned that he had anything to hide."

But what is this test, first created in 2005, and how does it work?

According to the website mocatest.org, it is a "rapid screening instrument for mild cognitive dysfunction". Among other things, the test assesses attention and concentration, memory, language, calculation and - appropriately for a president - executive function.

It takes around 10 minutes to complete and any score above 26 is considered "normal".

An example of the sort of test Trump faced is available online. 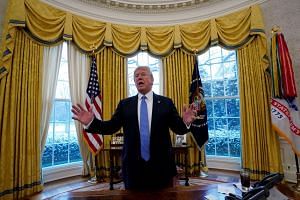 Candidates first have to copy a cube, link up numbers to the appropriate letter in the alphabet (A=1, B=2, etc) and draw a clock showing the time 11:10.

They are then given three animals to identify - the online example shows a lion, rhinoceros and camel.

Five simple words are then read out and the candidate has to recite them immediately and then again after five minutes.

This test is then repeated with numbers, with a series of three numbers to be recited backwards.

To test "attention", the examiner reads a long list of letters and the candidate has to tap with his or her hand whenever the letter "A" is read out.

To test language, the candidate is asked to repeat two phrases and then recite as many words beginning with a certain letter as possible in one minute. Eleven words are required to secure a point.

The two final questions are an abstraction test, where candidates have to decipher a link between two words, and "orientation", where the candidate has to state the day of the week, as well as the month, date, year and what city they are in.

In the initial study that established the test, the average score was just over 27.

Candidates with "mild cognitive impairment" scored just over 22 and people with Alzheimer's disease around 16.

An example of the test can be found online here.