NEW YORK (REUTERS) - A growing percentage of Americans see climate change as an "imminent" threat driven mainly by human activity, and more than two-thirds want Washington to work with other nations to combat it, according to a Reuters/Ipsos poll released on Thursday (Dec 13).

The public concern over global warming in the United States clashes with President Donald Trump's policies aimed at maximising fossil fuel production and dismantling climate protections he views as too onerous and costly for industry.

Trump last year announced his intention to withdraw the United States from the Paris Agreement, an accord to curb global warming struck by nearly 200 nations in 2015 that he said would kill American jobs and have no tangible environmental benefit.

Delegates are now meeting in the Polish city of Katowice to write a rulebook for the deal and United Nations Secretary-General Antonio Guterres on Wednesday warned failure to reach an agreement would be suicidal.

More than half, or 57 per cent, also think global warming is caused by "human activity" or "mostly human activity", according to the survey, up from the 47 per cent who attributed it to human activity in a similar poll in 2012.

And 69 per cent said in the poll that the United States should work with other nations to curb climate change, including 64 per cent of Republicans and 80 per cent of Democrats. That marks a decline from 72 per cent in a similar poll in 2017. 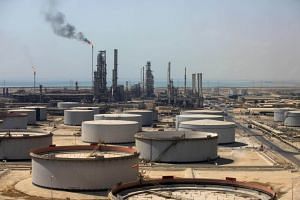 The latest Reuters/Ipsos poll surveyed 4,660 adults in English in the United States and has a credibility interval, a measure of precision, of 2 percentage points.

The survey came close on the heels of a US government report released last month that said climate change will cost the US economy hundreds of billions of dollars by the end of the century, undermining health, infrastructure, and industries from farming to energy production.

Trump rejected the report's findings, saying: "I don't believe it". The White House said the report relied on faulty methodology and that the next assessment of the threats posed by climate change would be more transparent and data-driven.

The United States has seen a surge in oil and gas output in the past decade, due mainly to advances in drilling technology, and this year became the world's top producer of petroleum, ahead of Saudi Arabia and Russia.