WASHINGTON (BLOOMBERG/NYTIMES/THE WASHINGTON POST) - The understudies to Mr Donald Trump and Mrs Hillary Clinton, both veteran politicians with folksy dispositions, made the highest-profile and most-perilous appearances of their careers at the one and only vice-presidential debate of this election on Wednesday (Oct 5).

Here is what some media said about the performance by Democratic vice-presidential nominee Tim Kaine and Republican Mike Pence at the 90-minute session held at Longwood University in Farmville, Virginia.

Democratic vice-presidential nominee Kaine repeatedly tried to bait Republican Pence into defending his running mate's most controversial positions and statements, but the Indiana governor deflected the attacks with the kind of discipline Republicans have been urging Mr Trump to display, Bloomberg said.

In their first and only debate, Mr Kaine and Mr Pence moved quickly and aggressively to confront each other in a series of exchanges that were every bit as combative as last week's meeting between Mr Trump and Mrs Clinton.

Mr Pence mostly did not take the bait and managed to keep his cool and avoid being defensive. He stayed on message with extended answers, even on controversial topics like immigration and police bias, and often turned the topic back to Mrs Clinton.

Mr Pence did defend Mr Trump as the candidates tangled over the billionaire businessman's refusal to release his tax returns and a New York Times story that his 1995 tax return showed a nearly US$1 billion loss that could allowed him to avoid paying federal taxes for nearly two decades. 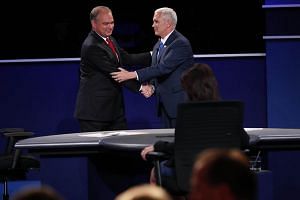 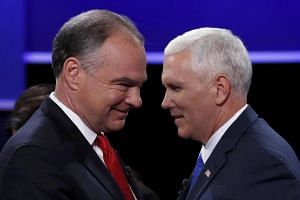 Pence was comfortable, calm and cool

From the very beginning, Mr Pence was the more comfortable of the two men on the debate stage, The Washington Post said.

He repeatedly turned to the camera when he answered questions, making clear he understood that the real audience was not in the room but watching on TV.

The Indiana governor was calm, cool and collected throughout - a stark contrast to the fast-talking (and seemingly nervous) Kaine.

After its first hour, the debate between Mr Kaine and Mr Pence was defined by frequent interruptions by Mr Kaine, and - from Mr Pence - a calm, confident disdain, and a constant struggle to reconcile his positions with those of Mr Trump himself.

It seemed clear that Mr Kaine had come armed with pre-planned zingers that mocked Mr Trump, with varying degrees of zing.

Mr Pence mocked that: "You used that a lot, and I think your running mate used a lot of pre-planned lines." 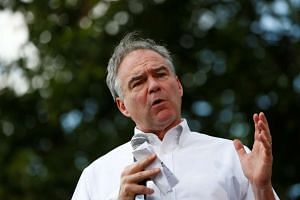 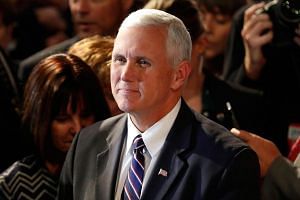 Kaine was aggressive from the start

The New York Times said Mr Pence was scrambling at times to keep up with near-constant attacks on Mr Trump's fitness for the presidency.

Mr Kaine was far more aggressive from the start, using a question about his own qualifications to praise Mrs Clinton at length and then declare: "The thought of Donald Trump as commander in chief scares us to death."

Mr Kaine, trained as a litigator, frequently used this tactic of turning questions about himself and Mrs Clinton into opportunities to extol his running mate and assail Mr Trump.

"I can't imagine how Governor Pence can defend the insult-driven, me-first style of Donald Trump," Mr Kaine said after noting that Mr Trump had once described Mexicans as "rapists" and questioned President Barack Obama's citizenship.

Mr Pence, more formal and mild-mannered than his rival, seemed frustrated by the fusillade coming from Mr Kaine. The Republican often looked down and shook his head slightly in the face of the attacks on Mr Trump, while Mr Kaine tended to interrupt and talk over Mr Pence. But at other points he showed a deftness that Mr Trump often lacked at his own debate last week.

Both provided sharp contrasts with the presidential candidates

CNN said in terms of style, "Kaine and Pence both provide sharp contrasts with their superiors on the ticket, both of whom are controversial, outspoken and polarising figures who have lived in fame's glaring spotlight for decades".

The rival running mates repeatedly interrupted each other, with Mr Kaine responding and rebutting each charge Mr Pence made as he made it.
While the tactic displayed Mr Kaine's energy and skill with talking points, said CNN,  it risked coming across as overbearing and irritating to some viewers at home.
At one point, the moderator warned them that viewers at home would not hear anything if they continued to talk over each other.
While Mr Pence projected an air of calm, he was on the defensive most of the time and dodged multiple questions, CNN said.

The moderator, Elaine Quijano of CBS News, lost control of the debate at several points as Mr Kaine trampled on Mr Pence's two-minute answers and the governor grappled with taking control of the exchanges, the New York Times said. For her part, Quijano kept her questions focused on policy and asked far more questions about foreign policy than came up at the first presidential debate.

Both candidates failed to respond to a range of substantive questions from Quijano, The New York Times said.

Neither ticket, for example, has a plan to take on the nation’s long-term budget imbalances. Both candidates said that, unlike Mr Obama, they favour creating a safe zone in Syria, but, when pressed, neither explained how or by whom that zone would be protected.