ABERDEEN, Maryland (WASHINGTON POST) - A woman shot herself twice in the head after killing three co-workers and wounding three others at about 9am on Thursday in the shooting at a Rite Aid distribution centre in Aberdeen, Maryland, authorities said.

The woman had suffered from mental illness and had recently shown agitated behaviour that caused friends and family to worry about her, officials said on Friday (Sept 21) in describing what they had learned so far about the shootings.

The shooter - Snochia Moseley, 26, of White Marsh, Maryland - shot herself once and grazed her head, Harford County Sheriff Jeffrey Gahler said, then shot herself again in the head with a 9mm Glock, dying later at a hospital.

The sheriff said as employees checked in for work Thursday, Moseley may have butted in line and was rebuked by others.

Gahler called the incident "senseless violence" and said a search of Moseley's home revealed no obvious evidence of a motive. "

There's no way to make sense of something that's so senseless," he said.

The three other people who were wounded have non-life-threatening injuries, officials said. 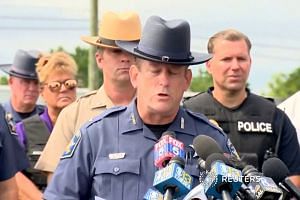 Troi Coley, who described herself as a close friend of Moseley's since high school, said Moseley had suffered from bipolar disorder and struggled since early in high school with severe depression, partly connected to her feelings of not being accepted when she first came out as a gay female and later as transgender.

Coley said she and Moseley were freshmen together at Chesapeake High School in Essex, Maryland, a historically working-class suburb east of Baltimore. Moseley transferred in the 10th grade to Overlea High in a predominantly middle-class suburb north-east of the city.

"This is a girl who was depressed most of her life because she couldn't accept herself to be who she was after she came out as gay, and she thought nobody else could accept her either," said Coley, now an intern at CharmTV, a cable station run by Baltimore City government. "Snochia went through a lot of changes, but just could never really accept who she was. She just felt like she wasn't accepted by anybody."

Coley said Friday that during periods when Moseley was getting intensive mental health treatment, she had brighter moments and enjoyed writing rap lyrics. Coley said Moseley wrote an unpublished manuscript about coming out as transgender, titled "No Swagger." In it, Moseley detailed the pain of struggling to accept her sexual orientation and being rejected by others, including some family members, Coley said.

#Maryland #shooting Update: A female suspect has been arrested for shooting at least 5 people, killing 4 of them at a #RiteAid warehouse.

Moseley had begun receiving hormone therapy about a year ago as she planned to undergo a sex-reassignment operation, Coley said.

"Since then, she has been going through a terrible time," said Coley.

"She had just gone through this change, the hormone therapy, and struggling to find her way, but she couldn't in the end."

Officials said they were reviewing surveillance video that shows the shootings and that it showed "she was moving fast and seemed to be targeting people," according to Gahler.

Moseley arrived for work Thursday at 6.30am. She was a seasonal worker there and had been hired about two weeks ago.

At 7.21am, she left the facility and went to her home in Baltimore County and got the gun, pepper spray and handcuffs, officials said. She came back to the Rite Aid warehouse and arrived at the front gate around 8.35am. The sheriff said she sat in a vehicle in the parking lot before going back into the workplace.

At 8.53am, she went back into the Rite Aid warehouse.

Then, at 9.05am, she came out again. Outside, she shot the first victim who was a man. She then went back into the building at 9.07am and continued shooting. The sheriff said it appeared Moseley chose to start the shooting at break time when workers had come out and were going back into the facility. Rite Aid has unarmed security guards on its property in that area but there wasn't a guard in that building at the time of the shooting, according to Gahler.

Authorities said she struck five others before finally shooting herself. The two women who were killed were shot inside the warehouse where 65 people were working.

Law enforcement said they arrived within five minutes of the initial call for shots being fired. Moseley had already shot herself.

One of the first responders dragged the wounded Moseley into another area, the sheriff said, not knowing she was the shooter and started life-saving measures. She was taken to an area hospital where she died.

Moseley had at one point held a security job but officials did not say where. She had a valid handgun permit that had expired in May, according to sheriff officials.

Gahler said Moseley was diagnosed with mental illness in 2016 but he would not elaborate on any details. Major William Davis of the sheriff's office said she didn't meet the multi-pronged standard in Maryland for being barred from obtaining a weapon and legally bought a gun in March.

Under Maryland law, people suffering from mental health issues are banned from owning firearms if certain criteria are met.

After the shooting, Moseley's friends and family were interviewed by law enforcement and told them that she had become "increasingly agitated" over the last two weeks and they had grown concerned about her well being, according to Gahler.

On Thursday, a Swat team with rifles charged into the area. Survivors were eventually brought out, including one woman who was crying and barefoot. She said she left so fast that she lost her shoes. She told one person who worked a furniture distribution company that she'd seen her friend get shot in the head.

The Maryland incident follows a week of violence across the country in workplaces. On Wednesday, a 43-year-old man opened fire on fellow employees at a software company outside of Madison, Wisconsin. Three people were seriously wounded. He then killed himself. Another person was grazed by a bullet.

It isn't the first time Harford County has been hit by such violence. In October 2017, three people were killed and two others wounded in a shooting at a Harford County business park. And in 2016, two sheriff deputies were shot and killed at a Panera restaurant in the county.

Gahler called the latest incidents a sign that there seems to be a "disregard for human life that seems so commonplace across our nation."

Harford County Executive Barry Glassman said mental illness has played a large part in the three shooting incidents in Harford, calling it a "ticking time bomb," as to when mental illness can turn violent.

On Thursday, some of those who worked in the area described what they saw.

Mike Carre, who works at Zenith Global Logistics, which is next door to the Rite Aid facility and whose facility was used by authorities to bring survivors said some people shared what they had seen with him.

"Normally, she was a nice person, but she came in a bad mood," Carre said, recounting what Rite Aid employees told him. He added that they said "she wanted to pick a fight. And then she started shooting."

Carre said many of the 40 Rite Aid employees that were brought to the Zenith offices were crying and in disbelief.