TUCSON (AFP) – First Lady Melania Trump on Thursday (June 28) made a second visit to meet undocumented child migrants as the United States struggles to contain a border crisis and a week after her first was overshadowed by wearing a controversial jacket.

“I want to thank you for all your hard work,” she told border and immigration officials at a Customs and Border Patrol facility in Tucson, Arizona.

“I know how difficult and dangerous your daily jobs are,” the first lady added. “I am here to support you and help any way I can.”

The 48-year-old mother of one and former model, herself an immigrant from Slovenia, played her choice of clothes safe on Thursday, dressing monochrome in white pants and a black top.

In Tucson, Arizona, she visited a Customs and Border Patrol facility and had a roundtable discussion with Border Patrol, Immigration and Customs Enforcement, the US Marshals Service and a local rancher on the situation on the ground.

The crisis saw his wife make a rare foray into politics, stopping short of criticising her husband, but saying she hated to see families separated and calling for bipartisan immigration reform to fix the issue. 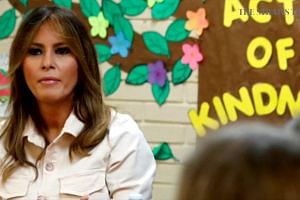 On Wednesday (June 27), a “compromise” bill designed to reform immigration law – and put a definitive end to family separations – failed in Congress, embarrassing the president.

It was opposed by all Democrats but also by conservatives who argued it did not do enough against illegal immigrants.

On Thursday, her spokeswoman said the first lady wanted to “learn” from those on the ground. “She’s advocating for quality care for these children under difficult circumstances,” Stephanie Grisham told reporters.

Border Protection Commissioner Kevin McAleenan said 1,600 people, including 539 in families, tried to enter the United States illegally the day before.  Chief patrol agent Rodolfo Karisch showed Trump a photo of a six-year-old boy crossing the desert with a coke bottle and a note.

“People also have to understand the danger of the desert, of the heat,” he said.

The first lady toured a short-term detention facility with migrants from Guatemala or Honduras, who had all been there less than 72 hours.

On her first visit on June 21, she was castigated for boarding her aircraft en route to meet children at the US-Mexico border in Texas wearing a US$39 Zara jacket emblazoned with the words “I really don’t care. Do U?”

The decision provoked a storm of criticism and speculation as to whether it was directed at anyone from her husband, to the media to the children to no one at all, and spawned copy-cat jackets from people saying they did care.

During that visit to Texas, Trump asked how she could “help these children to reunite with their families as quickly as possible.”