NEW YORK (NYTIMES) - When Chris Godfrey learned in early January that the record for "likes" on an Instagram post was held by the celebrity and businesswoman Kylie Jenner, he took it as a challenge. He remembers thinking: "Could something as universal and simple as an egg be great enough to beat that record?"

It could! Just nine days after the thought, that record was cracked. Godfrey had beaten Jenner's post about her infant daughter with a simple picture of an egg. The original egg post now has more than 52 million likes - her post is shy of 19 million - and the egg's account now has more than 10 million followers.

Why an egg? Godfrey explained: "An egg has no gender, race or religion. An egg is an egg, it's universal."

Godfrey, a 29-year-old advertising creative who works at the & Partnership in London, and the two friends he has enlisted to help him with the account have now delivered their second act. It is a commercial produced with and aired on the streaming service Hulu, timed to take advantage of the annual Super Bowl ad extravaganza. In it, the egg shares a story about how going viral has affected its mental health.

"The pressure of social media is getting to me," the egg discloses in the commercial, after introducing itself. "If you're struggling, too, talk to someone."

The ad then directs viewers to the website for the non-profit Mental Health America. The creators say that mental health is the first of several causes that the egg - which they and their fans call Eugene - will come to stand for.

"People have fallen in love with this egg, and Eugene the egg wants to continue to spread positive messages," said Alissa Khan-Whelan, 26, one of the friends working with Godfrey.

After the birth of the egg on Jan 4, Godfrey stayed anonymous. But he, Khan-Whelan and another friend, C.J. Brown, 29, agreed to speak to The New York Times to tell their story and explain their intentions.

"We felt that the time was right to come out," Khan-Whelan said. "We can put any speculation to bed."

There has been a lot of puzzlement about how a picture of an egg created an Instagram frenzy. Some speculated that the account's creator had paid influencers to spread the word. Others even took credit for growing the egg's audience.

Godfrey says that such claims are untrue and that the account's growth was "completely organic". No one person helped the egg's rise in popularity and no single account or group of accounts helped it to explode.

They did note a demographic that embraced the egg immediately. 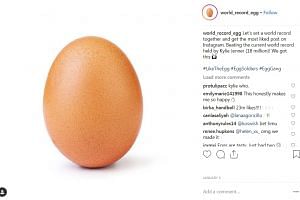 "I think it was perhaps the younger generation," Godfrey said. "In the schools and stuff, it started to spread. It sort of spread through playgrounds."

He noticed that interactions with young people would peak between 3 and 4 in the afternoon, "when school was out".

Khan-Whelan recalled seeing "amazing videos of kids in their class going 'Miss, miss, have you liked the egg?'"

Marketers agreed that the youth had been key to the egg's success. (Instagram technically requires users to be 13 to create an account, but that rule is often disregarded.)

Margaret Johnson, chief creative officer of the agency Goodby Silverstein & Partners, only became aware of the egg account after realising that her 12-year-old son had liked the image. She then sought out more information about it.

"What a great thing for them to do and kind of hijack the Super Bowl through social, and hammer home a responsible message," she said.

The egg's audience was also amplified by Godfrey's decision to incorporate user-generated content into the account's Instagram stories, where posts expire after 24 hours.

The egg's main Instagram feed stayed spare and mysterious, while Godfrey shouted out followers in its stories, helping to infect his growing audience with a sense of team spirit. (The hashtag #EggGang was quickly adapted to describe the account's fans.)

"In its infancy, it was one of those ridiculous things, like, 'Oh, we're trying to break this world record by just liking this random image,'" said Sam Shepherd, an executive creative director at the digital agency 360i.

That agency won industry praise in 2013 when it worked with Oreo to quickly tweet "You can still dunk in the dark" during an unexpected blackout at the Super Bowl. Shepherd described the egg's next act as the 2019 version of that stunt.

The team behind the egg declined to talk about the money it has been offered or the big names it has come into contact with, preferring to keep the attention focused on Eugene. (Asked about one marketer's claim that partnering with the account would be worth at least US$10 million (S$13.5 million), Khan-Whelan said only that the number was "greatly exaggerated.")

It is true, though, that building an entity - really, a platform on a platform - that reaches millions of people brings financial benefit.

The egg team is being paid by Hulu. It said that Nick Tran, Hulu's vice president of brand marketing and culture, pursued the opportunity, and that he was introduced to them though The Times, a new agency in Chicago created by the Instagram enthusiast Jason Peterson. It would not disclose what it was paid.

"Dollars always follow eyeballs," said Andrew Essex, chief executive and founder of Plan A, a creative holding company. For the creators, the account's success was "basically a license to print money," he said.

Godfrey, Brown and Khan-Whelan say they are less interested in money than in promoting positivity.

"We've had plenty of amazing offers and opportunities that have come on to the table," Khan-Whelan said. "So many. We've not really been sharing details because we don't think this is about us. This is about Eugene the egg and what the egg can do."

Godfrey would not comment on what the last few weeks had been like, other than to say it had been "crazy" and "a real journey". (He, Brown and Khan-Whelan have essentially been living together, in South East London, for that time.)

"It's not really about me," he insisted. "It's just about the egg and sort of where we can take it and what we can do with it."

They would not comment on the causes they will support beyond mental health, saying that they would take each day as it comes. They plan to remain highly responsive to their audience.

"The fact that they were able to get a lot of people to look at a picture of the egg - it was the ultimate anomaly, just a complete freak event," Essex said. "A tear in the time-space continuum. It doesn't make much sense, but it's not going to continue. Every once in a while something comes out of the blue and breaks the Internet for no reason. This is the quintessential fluke. It's not replicable. It's not replicable and it's not sustainable. With all due respect."

(Asked to whom the respect was due, he clarified: "To the egg people.")

The egg people are not dissuaded. They have heard from fans in Azerbaijan and Dubai. They are particularly popular in the United States, which is one of the reasons they decided to do a Super Bowl ad.

"It's a dream to put that in the same sentence that we're doing something in relation to the Super Bowl - it feels really special," Khan-Whelan said. "Michael Jackson performed at halftime, and now Eugene is center stage."

Godfrey said the team sees the Super Bowl as more than just an American event but rather as "an international moment".

"Eugene is global, Eugene is really global all over the world," Khan-Whelan said. "He likes football. Or she, sorry. Or it."

Asked to respond to Essex, Godfrey did agree that the egg's success had been a fluke.

"But it's a fluke that caught the world's attention," he said. "It's what you do with that attention that counts."