WASHINGTON • US Defence Secretary James Mattis has said he is seeking a way ahead for military ties with China after Beijing postponed talks in protest at Washington's decision last week to impose sanctions over China's purchase of Russian weaponry.

Mr Mattis travelled to China in June in an attempt to deepen military-to-military dialogue with Beijing, even as Sino-US trade tensions climbed and anxiety in Washington grew over China's modernisation of its armed forces and its increasingly muscular military posture in the South China Sea.

"We believe that we do have to have a relationship with China and Secretary (of State Mike) Pompeo and I are of one mind on this," Mr Mattis told reporters at the Pentagon on Monday.

"And so we're sorting out the way ahead right now."

China's Defence Ministry has said it would recall navy chief Shen Jinlong from a visit to the United States and postpone planned talks in Beijing between Chinese and American military officials that had been set for next week.

It added that China's military reserved the right to take further countermeasures.

At the Pentagon, Lieutenant-Colonel Dave Eastburn confirmed that the US military had been informed that China's navy chief would no longer meet America's top naval officer, Admiral John Richardson.

"We have no additional information at this time," he said.

Last Thursday, the US State Department imposed sanctions on China's Equipment Development Department, the branch of the military responsible for weapons procurement, after it engaged in "significant transactions" with Rosoboronexport, Russia's main arms exporter.

The sanctions are aimed at Russia. They fall under the Countering America's Adversaries Through Sanctions Act, which was signed into law last year to punish Russia for meddling in US elections, aggression in Ukraine and involvement in Syria's civil war. 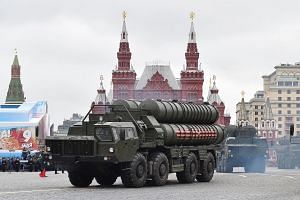 China says navy chief to visit US next month

The mobile S-400 batteries, which include radars, a control system, and missiles with a range of up to 400km, were first deployed in Russia in 2007 and are considered Moscow's most effective defence against aircraft, missiles and drones.

Meanwhile, the US State Department has approved the sale to Taiwan of spare parts for F-16 fighter planes and other military aircraft worth up to US$330 million (S$450 million), prompting China to warn yesterday that the move jeopardised Sino-US cooperation.

US military sales to self-ruled Taiwan, which China claims as its territory, is an irritant in the relations between the world's two largest economies. Taiwan would still need to finalise details of the sale with US companies.

Chinese Foreign Ministry spokesman Geng Shuang told a daily news briefing in Beijing that US arms sales to Taiwan were a serious breach of international law and harmed Chinese sovereignty and security interests.

The Pentagon said the proposed sale is required to maintain Taiwan's "defensive and aerial fleet", and would not alter the military balance in the region.

In a statement yesterday, Taiwan's Presidential Office thanked the US for its support and said the island would continue to "stay in close communication and cooperation" with Washington for issues including security.