WASHINGTON (BLOOMBERG) - The abrupt resignation of US Defence Secretary Jim Mattis has governments from Seoul to Brussels on edge, as the reliability of American alliances and the direction of policy under an erratic leader come under question.

The former Marine general was widely seen as a moderating force against President Donald Trump's hostility towards traditional American alliances and overseas troop commitments, and had come to be described as "the last adult in the room".

Besides the immediate moves to pull forces from Afghanistan and Syria, Mattis' departure could have ramifications for US standing around the world, from North Korea to Europe, where Trump's criticism of Nato has prompted calls to form a continental army.

Here's a look at how the change impacts some global tension points:

Mattis leaves at a perilous time for South Korea, which is grappling with the price of Trump's outreach to North Korean leader Kim Jong Un and his decision to suspend joint annual military exercises with the south.

Mattis worked to reassure South Korea that America's commitment remained strong, while the president focused on questioning the necessity of having some 28,000 troops on the peninsula and pressed Seoul to pay more for its security.

Mattis's exit - especially after he clashed with Trump over troop withdrawals elsewhere - could encourage Kim's efforts to negotiate a reduced American presence directly with the president.

On Thursday, North Korean state media published a commentary saying that the removal of the US' nuclear weapons from the region was a condition of its own disarmament.

"It's not inconceivable that Trump might order a withdrawal of US forces from Korea," said Daniel Pinkston, a lecturer in international relations at Troy University in Seoul.

Mattis' resignation and the announcement of a partial US troop withdrawal undercut the recent efforts to finally end the 17-year-long conflict in Afghanistan. They've also left US allies hanging. Germany, which has the second-biggest troop contingent in Nato's Afghanistan mission after the US, is particularly miffed.

"We naturally came to the US' aid when they invoked the collective defence clause after the horrific Sept 11 attacks," Juergen Hardt, a senior foreign policy lawmaker for German Chancellor Angela Merkel's party, said in a statement.

"Our maxim in the alliance must remain 'in together, out together".'

But that's not happening.

Trump's troop withdrawal will be demoralising for Afghan security forces and boost morale among their enemies, Michael Kugelman, a senior associate for South Asia at the Woodrow Wilson Centre in Washington, said via email.

"For the Taleban, it's a best-case scenario. It's a propaganda coup and tactical triumph rolled into one," he said. "The Taliban has managed to get US troops to withdraw without giving anything up, and it now has a huge battlefield advantage to look forward to."

Mattis's departure will make it easier for Trump to implement the decision to leave, he said.

Even before the decision to withdraw US forces from Syria, the Middle East had been jolted by a series of policy about-faces under Trump, from the undoing of his predecessor's signature deal with Iran to the decision to move the US embassy in Israel to Jerusalem.

While Trump justified the Syria move by saying the US has scored "historic victories" over Islamic State in Iraq and Syria (ISIS), he's drawn bipartisan criticism from lawmakers who warn that it leaves Syria's future in the hands of Russia and Iran, the primary backers of President Bashar al-Assad.

Turkish President Recep Tayyip Erdogan had been preparing to start a military operation in northeastern Syria targeting America's Kurdish allies, a group known as the YPG, which Turkey views as a terrorist organisation.

The YPG has been seen as the most effective counter to ISIS - they will be left to fight alone after the US withdraws, and are likely to face increasingly severe attacks from Turkey.

The reshuffle at the Pentagon will exacerbate already deep concern in Europe, and in particular Nato. After Trump initially failed to recommit the US to the alliance's mutual-defence pact and withdrew from the Paris climate accord, it fell to Mattis to reassure allies: "Bear with us. We will still be there, and we will be there for you."

With him gone, allies are losing confidence that there's any resistance within the administration to Trump's "America First" policies. 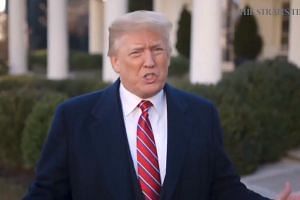 Why US allies should worry about Defence Secretary James Mattis' departure

Secretary of State Michael Pompeo has echoed the president's more critical view of the European Union, the United Nations and a host of other international organisations, saying in a Brussels speech this month "they must be reformed or eliminated."

"For US allies, Mattis' departure is bad news," Marko Mihkelson, head of the Estonian parliament's foreign affairs' committee, said in an interview with Delfi news.

"Trump clearly wants a person in charge of the Pentagon who would be obedient to the White House and would enact the president's decisions incontrovertibly."

Mattis "checked President Trump's worst instincts and was a strong supporter of Nato," Guy Verhofstadt, head of ALDE in the European Parliament and a former Belgian prime minister, said in a tweet.

"Europe stands unprepared & needs to speed up the establishment of a European Defence Community."

His talks with Chinese Defence Minister Wei Fenghe helped ease tensions after a near collision in the South China Sea, leading to a Washington meeting in which both sides agreed the "military-to-military relationship could be a stabilising factor" for ties.

"The Chinese side in general thinks Mattis is a rational and cautious person and is worrying about who will replace him," said Sun Zhe, co-director of the China Initiative at Columbia University.

"Under Mattis, US and China armies have some contradictions in the South China Sea and arms sales to Taiwan, but the conflict has not escalated and mutual exchanges were continuing."

Over the long history of post-war disputes between the US and Japan, their security pact has often proved an anchor. Trump threw that into doubt by not only threatening to levy auto tariffs against Japan, but questioning its contribution to security.

Since taking the job, Mattis has repeatedly visited to share reassuring words about the alliance with Prime Minister Shinzo Abe.

"When the Trump administration was straying off course, it's not an exaggeration to say that it was Mattis who just about managed to keep foreign policy to the proper line," Akihisa Nagashima, a former vice-defence minister of Japan and now an opposition lawmaker without party affiliation, said on Twitter.

"The outlook beyond February next year is unclear."

For the Kremlin, Mattis' announcement capped a sweep of wins the Kremlin had long desired but didn't believe would ever happen.

But the jubilation was measured in public statements, and some were tinged with anxiety about what the US retreat might mean for conflict zones where Russia's now left as the primary foreign power.

While the US secretary of defence represents the traditional American view of projecting power all over the world, "Trump looks at all of these positions pragmatically," said Oleg Morozov, a member of the international affairs committee in the upper house of Russia's parliament.

"In Syria, the effort to depose Assad has failed so there's no longer any point to the American presence. It even discredits the US to an extent. It's easier to pull out. It's the same in Afghanistan, where there isn't and won't be any long-awaited victory," Morozov said.

"Putin is victorious here in the sense that he offered a more effective strategy."

Kremlin spokesman Dmitry Peskov's reaction was less triumphant - and less certain. He said he couldn't speculate on what decisions Mattis may have kept Trump from making, but warned that the unpredictability of US policy was a growing risk.

"When stability and predictability give way to unpredictability, surprise and, shall we say, a certain chaotic nature in various decisions, that of course is a cause for discomfort and concern," he said.

Trump pushed back on criticism of his approach toward both Russia and China in a tweet on Friday morning: "There has never been a president who has been tougher (but fair) on China or Russia - Never, just look at the facts. The Fake News tries so hard to paint the opposite picture."