LOS ANGELES (AFP) - The authorities in California said on Sunday (June 12) they were trying to piece together the motive of a man who had an arsenal of weapons in his car and planned to attend the Los Angeles Gay Pride parade.

James Howell, 20, was detained in nearby Santa Monica with multiple weapons, ammunition and bomb-making materials in his car, which had Indiana license plates, the police said. The arrest came just hours after 50 people were massacred at a gay nightclub in Florida.

However, officials later said that investigators were trying to determine Howell’s intentions and that he had only told the police that he planned to attend the parade and made no reference to doing any harm. 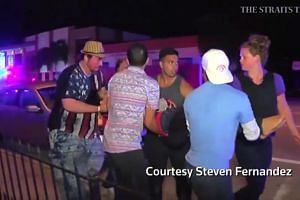 “It was a misstatement as chief Seabrooks was given the wrong information,” Santa Monica police lieutenant Saul Rodriguez told AFP.  “(Howell) did not make any additional statements saying he was going to do anything further than attend the parade.”

He said that Howell was being held on US$500,000 bail on state charges of possession of firearms and explosives.

Santa Monica police said in a statement that Howell was arrested after a resident reported a prowler knocking on their door and window at around 5 am.

When officers responded, they found Howell sitting in a car with three assault rifles, high-capacity magazines and ammunition, the statement said.

Ms Seabrooks said there was no known connection between Howell and the carnage in Orlando, Florida - the worst mass shooting in US history.

The authorities said they had considered calling off the parade but then decided to go forward while beefing up security, including placing undercover police in the crowd.

The march went ahead without incident.

The Los Angeles Times, quoting Indiana court records, said Howell was charged in October 2015 with intimidation and a felony count for pointing a firearm at another person.

Prosecutors dropped the felony charge after he pleaded guilty in April to the lesser misdemeanor charge of intimidation.  As part of his plea deal, he agreed to forfeit all weapons during his term of probation, the Times said.