NEW YORK • In Chicago, officials warned about the risk of almost instant frostbite on what could be the city's coldest day ever. Warming centres opened around the Midwest. And schools and universities closed throughout the region as rare polar winds streamed down from the Arctic.

At the same time, on the other side of the planet, wildfires raged in Australia's record-breaking heat. Soaring air-conditioner use overloaded electrical grids and caused widespread power failures. The authorities slowed down trams and cancelled some to save power.

This is weather in the age of extremes. It comes on top of multiple extremes, of all kinds, in all kinds of places.

"When something happens - whether it's a cold snap, a wildfire, a hurricane, any of those things - we need to think beyond what we have seen in the past and assume there's a high probability that it will be worse than anything we've ever seen," said Dr Crystal Kolden, an associate professor at the University of Idaho, who specialises in wildfires and who is working in Tasmania during one of the state's worst fire seasons.

Consider these recent examples: Heat records were toppled from Norway to Algeria last year. In Australia, a drought has gone on so long that a child in kindergarten will hardly have seen rain in her lifetime. And California saw its most ruinous wildfires ever last year, triggering a bankruptcy filing this week by the state's largest utility, Pacific Gas and Electric.

Concentrations of carbon dioxide in the atmosphere are higher than they have been in 800,000 years and average global temperatures have risen.

The last four years have been the hottest on record, according to the World Meteorological Organisation, and the 20 warmest years on record have all come in the past 22 years.

Ocean temperatures have broken records in several straight years. As for the extremely low temperatures this week in parts of the United States, they stand in sharp contrast to the trend towards warmer winters. They may also be a result of warming, strangely enough.

Emerging research suggests that a warming Arctic is causing changes in the jet stream and pushing polar air down to latitudes that are unaccustomed to them. 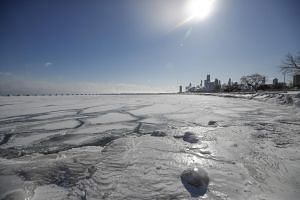 Hence, this week's atypical chill over large swathes of the US Northeast and Midwest.

Take Chicago, for instance. It woke up to the hazards of heat over two decades ago, when a five-day heatwave in the summer of 1995 killed hundreds of people, particularly those who lived alone.

The city developed a heat action plan. It planted thousands of trees, set up neighbourhood cooling centres and created a text-messaging system so residents could request that city officials check on vulnerable people.

Now comes a cold spell that a generation of Chicago residents has never experienced, with Wednesday night's temperature projected to dip to minus 31 deg C (the city's record low is minus 33 deg C, recorded in January 1985).

The city said it would send out five buses to cruise the streets as mobile-warming centres for homeless people. It has issued instructions on how to warm pipes so they do not freeze.

Extreme heat, though, is the bigger problem overall. Heat records have been broken twice as often as cold records in the US since the 2000s. One recent study in the journal PLOS Medicine projected a five-fold rise in heat-related deaths for the US by 2080.

The outlook for less wealthy countries is worse. For the Philippines, researchers forecast 12 times more deaths. Extreme heat is already devastating the health and livelihoods of tens of millions of people, especially in South Asia.

Extreme heat also affects the nutritional value of many crops. Even some of the most precious indulgences, like coffee, are in danger as temperatures rise.

This year, heat has been a problem in both the Northern and Southern hemispheres.

Mr Bob Henson, a meteorologist at Weather Underground, a forecasting service, said that in preparing for how climate change affects the weather, "we have to be prepared for a wider range of possibilities".

Some preparation is connected to resiliency. Mayors promise to make their cities more resilient to climate change after one disaster or another. Scientists experiment with crop seeds that are more resilient to the vagaries of extreme heat and drought.

Dr Kolden, the fire specialist, noted that as a species, humans pride themselves on being resilient. But that human trait can also have a downside.

It is why, often, even when officials tell people to evacuate from a fire zone or a flood plain, they do not. They think they will make it because they have made it before. Or that the forecasters are wrong.

"In our DNA, we've got this extreme resilience baked in," Dr Kolden said. "That ends up being our downfall when it comes to the changing conditions."

A version of this article appeared in the print edition of The Straits Times on February 01, 2019, with the headline 'Living in an age of extreme weather'. Subscribe
Topics:
More
Whatsapp Linkedin FB Messenger Telegram Reddit WeChat Pinterest Print Purchase Article Copy permalink