JAKARTA (DPA) - Boeing's apology last week for two deadly crashes involving its 737 Max model has emboldened a group of Indonesians whose relatives were killed in the first crash to sue for compensation, their lawyer said on Monday (April 8).

An Ethiopian Airlines 737 Max 8 crashed shortly after take-off on March 10, killing all 157 people on board. The same Boeing model was involved in a Lion Air plane crash in Indonesia in October that killed 189 people.

In November, US law firm Colson Hicks Eidson filed a lawsuit against Boeing on behalf of the father of one of the victims of the Lion Air crash.

However, most of the families affected had previously chosen not to sue, believing their chances of success were small, said Denny Kailimang, who is representing the plaintiffs. The chief executive of Boeing, Dennis Muilenburg, apologised last Thursday (April 4) for the lives lost in the two deadly crashes.

But he said that upcoming software updates to the plane's automated control system will make it "among the safest airplanes ever to fly".

"The CEO's statement strengthens claims by the victims' families for viable compensation from the planemaker," Kailimang said, since the apology means that Boeing implicitly accepts blame.

"We are confused, frustrated and disappointed with the situation," said Merdian Agustin, whose husband was killed in the Lion Air crash. 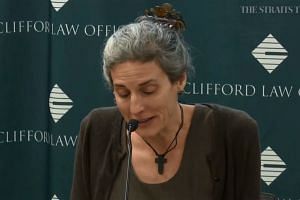 Lion, Garuda to stick with Boeing for now, say analysts

Between two Boeing crashes, days of silence and mistrust

"Our loved ones died tragically but there's still no compensation from the airline or the aircraft producer," she told reporters.

Aviation authorities around the world grounded Boeing 737 Max aircraft in the wake of the Ethiopia accident and the US manufacturer has taken a hit on the stock market.

A preliminary report has advised that the planes remain grounded for now and recommended the company re-examine the model's flight control system.

The report from Ethiopia's Aircraft Accident Investigation Bureau said the pilots of the plane that crashed in March followed the right procedures but were unable to stop the plane nose-diving.

The preliminary report will be closely scrutinised for similarities to the Lion Air crash, but officials said it would be months before the full report is released.