UNITED STATES • Last October, the Illinois Holocaust Museum and Education Centre made headlines when it unveiled pioneering hologram technology as part of its new Take A Stand Centre.

In a counter-intuitive twist, this futuristic addition allows the American museum to retain the intensely personal approach that has been its hallmark since opening in a small storefront in the late 1970s. At the time, the Chicago suburb of Skokie had the largest population of Holocaust survivors outside Israel.

In 2009, the Illinois Holocaust Museum and Education Centre, a US$55 million (S$73.5 million) building with permanent displays that take visitors through the years before and during World War II, was opened.

Among the thousands of objects on view are items donated by Chicago-area Holocaust survivors, many of whom are museum volunteers. It is particularly poignant when they are there in person to tell visitors about these artefacts.

But all the survivors are now quite elderly - what will happen when they are no longer around? Without living witnesses, the Holocaust could well be "reduced to a paragraph in a history book", as one of them put it.

The museum's board has long been concerned about this outcome, brought to the fore in April this year when 86-year-old Aaron Elster, the museum's beloved vice-president and a volunteer since the 1980s, died.

Yet a few days later, Mr Elster could be seen at the museum as usual, sitting in a red chair on the stage of the Take A Stand Centre theatre. Looking relaxed in khaki trousers and a blue shirt, he told students about the two years he spent hiding from the Nazis in a cramped attic in the Polish countryside. When he finally came out of hiding, he was 13, the age of the students in the audience. 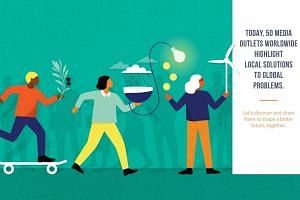 "My older sister survived, but my parents and little sister were dead," he said.

The room was totally silent. Mr Elster's lifelike 3D hologram had not only awed this tech-savvy crowd, it had moved them.

Developed in partnership with the University of Southern California (USC), this revolutionary interactive technology came along just in time. During the past two years, Mr Elster and 14 other survivors had travelled to Los Angeles, where they each spent a week sitting against a green background answering some 2,000 questions while being filmed by hundreds of cameras.

New Dimensions In Testimony, as the technology is known, is impressive but not perfect - sometimes the image jumps a bit, other times the survivor answers a different question than was asked.

Yet, the interactive aspect makes these holograms more personal, more touching than even the most technically perfect film.

The holograms are only part of a museum experience that seeks to "move visitors from knowledge to inspiration to action".

The museum is working with the USC to create holographic and other types of packages that can be licensed to institutions throughout the world. The goal is to offer a range that will be widely affordable and accessible.