NEW YORK (NYTIMES) - The legal challenge that helped free scores of travellers who were detained at airports around the country in the confusing early days of President Donald Trump's travel ban, prompting thousands of demonstrators to demand their release, was quietly settled on Thursday (Aug 31) in a Brooklyn courtroom.

Under the settlement agreement, the federal government is required to identify and send a letter to every individual who was improperly barred from entering the country under the original travel ban, providing a list of free legal services organisations that can help recipients obtain visas or other entry documents.

Approval is not guaranteed, but the government agreed to process their applications in good faith.

"For the people who were never able to come back, this is the best opportunity we can give them," said Becca Heller, director of the International Refugee Assistance Project.

The agreement did not provide any damages or monetary compensation for those affected by the ban, nor any award of legal fees to the groups who fought it in court. People who never reached a US airport because they were kept from boarding flights are not coveredby the settlement. 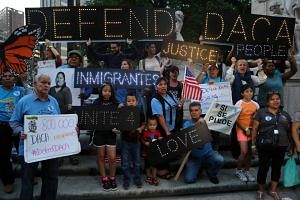 "Although this case has been moot since March, when the president rescinded the original executive order and issued a new one that does not restrict the entry of Iraqi nationals, the US government has elected to settle this case on favourable terms," Nicole Navas Oxman, a spokeswoman for the Justice Department, said in a statement.

The travel ban was an attempt to fulfill Trump's campaign promise of a "total and complete shutdown of Muslims entering the United States." The original version of the executive order imposing the ban was issued in January, barely a week after Trump's inauguration.

After that order was blocked in court, Trump issued a revised version, which will be the subject of arguments before the Supreme Court this fall.

The initial imposition of the ban was widely viewed as a political debacle for the young administration. John Kelly, who was secretary of Homeland Security at the time and is now the White House chief of staff, confirmed that he had not seen the final order until after the president signed it. The White House had not asked the department for a legal review. Some border control officials arrived at work the following morning still unsure how to interpret the president's order.

Travellers from affected countries were in the air on their way to the United States with valid visas when the executive order barring their entry was signed. Scores of refugees and immigrants found themselves trapped in airports across the country. Foreign students enrolled at American universities who had gone home for the winter holidays were blocked from returning. Legal permanent residents who had travelled for vacations or funerals were detained.

Hameed Khalid Darweesh, the first named plaintiff in the case, arrived at John F. Kennedy International Airport early in the evening, and watched his wife and three children pass successfully through passport control and customs and leave the arrivals area of the terminal, even as he was detained and held overnight and into the next day, much of the time in handcuffs.

Darweesh, an Iraqi immigrant who had worked for the United States in his native country for years at great personal risk, became a symbol of the travel ban.

One group of immigration lawyers put together a petition for a writ of habeas corpus overnight. The case was brought by the American Civil Liberties Union, the International Refugee Assistance Project at the Urban Justice Center, the National Immigration Law Center, and Yale Law School's Jerome N. Frank Legal Services Organisation.

Lawyers ready to represent detained travelers without charge converged on Kennedy and other airports, and so did protesters with banners, chanting and calling for the release of detainees.

A federal judge in Brooklyn ruled the next day, a Saturday, that the government could not deport the foreigners it was holding.

It remains unclear exactly how many people were covered by the case settled Thursday, or the extent of the ban's consequences for them.

In a news briefing the week after the ban was announced, Customs and Border Protection said that 721 people had been denied boarding for the United States after it began enforcing the travel ban.

Many others boarded planes but were detained on arrival while officials sorted out what to do. Still others were put on flights back to their points of departure. One of the main goals of the settlement is to find those people.

"Notwithstanding the administration's claim at the time that few people were inconvenienced, documents now show that roughly 2,000 people from the seven listed countries were detained in connection with the first ban for various lengths of time in the immediate days after the order was issued," said Lee Gelernt, deputy director of the union's Immigrants' Rights Project.

When the ban was revised in March, Iraq was removed from the list of predominantly Muslim countries covered by the ban. The revised version also exempted permanent residents and current visa holders, a significant scaling back of the ban's scope.

Even so, two federal appeals courts blocked some central parts of the revised ban. The Supreme Court agreed in June to decide whether the revised ban was lawful, and scheduled arguments for October.