LIVERPOOL (England) • British opposition leader Jeremy Corbyn said yesterday that Labour would vote against a Brexit deal based on Mrs Theresa May's proposals, the strongest warning yet to a prime minister whose plan to leave the European Union (EU) is hanging by a thread.

On the final day of his party's annual conference, he sought to show that Labour was ready to take over the reins of power, setting out in the most detail yet what he called "a radical plan to rebuild and transform our country" and promising new jobs from a green "revolution".

He also made a direct bid for the support of those outside the British capital who voted to exit the EU, often in frustration at feeling left behind by a London-based elite, saying Labour was ready to take over the tortured Brexit talks.

Britain is not due another election until 2022, but Labour is already preparing for a snap vote. Few are ruling out an early election after Mrs May's position was weakened last week when the EU rebuffed her Brexit proposal, known as "Chequers", which is also unpopular in her Conservative Party.

Mr Corbyn, a veteran euro-sceptic, said Labour respected the outcome of a 2016 referendum when Britons voted to leave the EU, the biggest shift in foreign and trade policy in more than 40 years.

"As it stands, Labour will vote against the Chequers plan or whatever is left of it and oppose leaving the EU with no deal," he told a packed hall in Liverpool. "And it is inconceivable that we should crash out of Europe with no deal - that would be a national disaster. That is why if Parliament votes down a Tory deal or the government fails to reach any deal at all, we would press for a general election. Failing that, all options are on the table."

He had hoped to steer his annual party meeting away from Brexit, which has divided his party just as it has done Mrs May's Conservatives and much of the country. Britain is due to leave the EU on March 29. 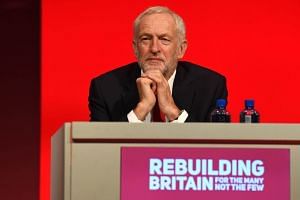 The Labour leader has backed a call to keep open the option of holding a second referendum on staying in the EU despite opposition from some powerful trade unions.

Mrs May has said she will press ahead with her proposals to leave the EU. But with a working majority of only 13 in the 650-seat Parliament and a former junior minister warning that up to 80 of her own lawmakers could vote against, she could have been hoping to secure some support from the opposition.

Mr Corbyn ruled that out. He told Mrs May in his speech that Labour would back a "sensible deal" with the EU, adding that if she can't reach one, she should "make way for a party that can".

Setting out his wider agenda for government, he took aim at the "greed-is-good, deregulated financial capitalism" that led to the 2008 financial crisis, saying politicians had failed to make "essential changes to a broken economic system". "That's why Labour is offering a radical plan to rebuild and transform Britain," he said.

He also pledged to create more than 400,000 skilled "green" jobs nationwide by investing in technologies to cut net carbon emissions by 60 per cent by 2030 and to zero by 2050.

He and his team have peppered their conference with policy announcements, trying to show that they are ready for the long term. The green jobs plan would cover two terms in government.

But the Conservative Party accused his team of making "unfunded" promises.

"Labour's ideas have all failed before and would leave the country struggling with more debt, more waste and ordinary working people paying for it - just like last time," said Ms Claire Perry, minister for energy and clean growth.

A version of this article appeared in the print edition of The Straits Times on September 27, 2018, with the headline 'Labour calls for election if no Brexit deal'. Subscribe
Topics:
More
Whatsapp Linkedin FB Messenger Telegram Reddit WeChat Pinterest Print Copy permalink