WASHINGTON (REUTERS) - The US Justice Department on Friday (Feb 14) dropped its criminal investigation of a top target of President Donald Trump, former No. 2 FBI official Andrew McCabe, at the tail end of a week in which the US law-enforcement agency has come under extraordinary pressure from the president.

Since he was fired by former attorney-general Jeff Sessions in March 2018, McCabe has often been a punching bag for Trump, and the department's decision not to charge him could further stoke Trump's ire.

Trump has spent the week criticising prosecutors, jurors and the judge in a separate case involving his longtime political adviser, Roger Stone, raising questions about whether he is eroding the independence of the US legal system.

McCabe said he was glad the investigation was over but criticised the Justice Department for taking so long.

"It is an absolute disgrace that they took two years and put my family through this experience for two years before they finally drew the obvious conclusion and one they could have drawn a long time ago," he said on CNN.

A lifelong Republican who worked at the FBI for 20 years, McCabe played a crucial role in the bureau's investigations of Democratic presidential candidate Hillary Clinton and Russian interference in the 2016 US election.

In campaign speeches, interviews and tweets, Trump has accused McCabe of conflicts of interest because his wife Jill McCabe, a Democrat, received donations for an unsuccessful 2015 Virginia state senate campaign from a Clinton ally.

McCabe questioned whether the decision to drop the investigation had anything to do with the ongoing fracas over Stone, a veteran Republican operative who was found guilty in November of lying to Congress, obstruction and witness intimidation.

The Justice Department's decision to seek a lighter sentence for Stone earlier this week prompted all four prosecutors on the case to resign in apparent protest.

"Like all Americans, I've been greatly concerned by what I've seen take place in the White House and in the Justice Department, quite frankly, in just the last week," he said. 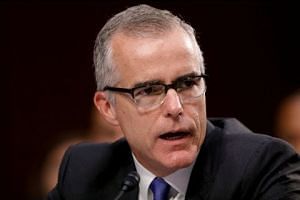 After Trump's attacks on US Justice Department, Attorney-General William Barr says he will not 'be bullied'

McCabe was fired just hours before he was due to retire, after the department's internal watchdog issued a report saying he misled investigators from the Inspector-General's office who were trying to determine whether he had improperly shared information with a news reporter during the 2016 presidential election.

The Justice Department under Trump has also dropped its investigations into Clinton and declined to prosecute former FBI director James Comey.

Trump has taken a string of aggressive actions since the Republican-controlled Senate acquitted him of impeachment charges last week.

Earlier this week, he abruptly yanked the nomination of Jessie Liu, the senior prosecutor who oversaw the Stone case and the McCabe investigation, for a new top job overseeing sanctions at the Treasury Department.

Trump said on Friday he had "the legal right" to interfere in criminal cases, despite an unusual rebuke from his Attorney General William Barr, his top law enforcement official.

Barr told ABC News that Trump's attacks made it "impossible" for him to do his job leading the Justice Department, telling ABC News in an interview: "It's time to stop the tweeting."

In his ABC interview, Barr said Trump had never asked him to interfere in a criminal case.

The president responded on Friday morning. "This doesn't mean that I do not have, as President, the legal right to do so, I do, but I have so far chosen not to!" he wrote on Twitter.