WASHINGTON (REUTERS) - A US judge said on Friday (Feb 1) she is considering imposing a gag order on President Donald Trump’s longtime adviser Roger Stone, who since being charged a week ago has repeatedly criticised Special Counsel Robert Mueller and the ongoing Russia probe.

US District Judge Amy Berman Jackson said during a hearing in Washington she is considering a gag order for both Stone and the prosecution, citing a number of “extrajudicial statements by the defendant” and noting that “this is a criminal proceeding and not a public relations campaign”.

Stone was charged with making false statements to Congress, obstruction of an official proceeding and witness tampering in an indictment secured by Mueller, who is investigating Russia’s role in the 2016 US election and whether Trump’s campaign conspired with Moscow.

Jackson said if she does impose a gag order, Stone would still be free to talk to the media about issues unrelated to the case. The judge asked both sides to file briefs by Feb 8 on the possible gag order.

Stone can “discuss foreign relations, immigration or Tom Brady as much as he wants to”, Jackson said, referring to the star New England Patriots quarterback who will be playing in the Super Bowl on Sunday.

Arrested in Florida on Jan 25, Stone pleaded not guilty on Tuesday in Washington. 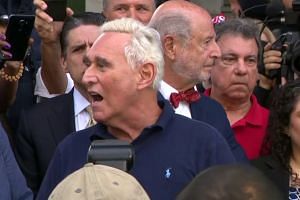 Roger Stone indictment does not mean probe is closing in on Trump... yet

Criminal defendants typically shun the media spotlight. But Stone, a 66-year-old self-proclaimed “dirty trickster” and Republican political operative since the days of the Watergate scandal that forced his former boss President Richard Nixon to resign in 1974, has embraced it.

Among other things, Stone has told reporters that FBI agents stormed his house at Mueller’s behest “to terrorise my wife and my dogs” using more force than US troops used to kill Al-Qaeda leader Osama bin Laden, and accused the special counsel of running a politically motivated “two-year inquisition”.

Stone gave a news conference on Thursday hosted by Infowars, the website of US conspiracy theorist Alex Jones.

In a Reuters interview, Stone dismissed the charges as “process crimes” with no intentional lies.

“Perjury requires both intent and materiality,” Stone said, calling any failure to disclose e-mails or text messages an “honest mistake”.

Jackson told Stone his prior comments could come back to bite him, saying Mueller’s office “will be free to introduce any of it as evidence”.

Prosecutor Michael Marando said he may propose an October trial date. Jackson said she hopes the trial can begin in the summer. The next hearing is set for March 14.

The indictment accused Stone of telling unidentified members of Trump’s 2016 campaign team he had advance knowledge of plans by the WikiLeaks website to release damaging e-mails – stolen by Russia, according to prosecutors – about Trump’s Democratic opponent, Hillary Clinton.

Stone’s indictment refers to two people with whom he is accused of communicating in an effort to get more information about Wikileaks’ plans for releases of stolen Democratic emails. Jerome Corsi, a right-wing political commentator and conspiracy theorist, previously confirmed to Reuters he is “Person 1” mentioned in the indictment.

“I’m sorry Roger has been talking like he has been. I don’t have anything against Roger. He’d be well advised to be more careful,” Corsi told Reuters.