Host's blunder also appears to have sparked rift among contestants

LAS VEGAS • Media and social networks lit up with reactions to the botched Miss Universe finale on Sunday night, which saw the Colombian contestant crowned and then dethroned in a matter of minutes, before the title was bestowed on the rightful winner, Miss Philippines.

The pageant's host, US comedian Steve Harvey, misread his cue card in front of a global television audience and initially announced that Miss Colombia, Ms Ariadna Gutierrez, had triumphed.

But as she blew kisses to an adoring crowd, Mr Harvey was forced to come clean about his blunder. "OK folks, I have to apologise. The first runner-up is Colombia." 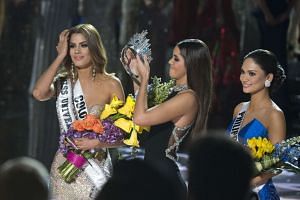 To me, our queen is and will remain Miss Universe. They put the crown on her head. The photos are there to prove it. To me, as a Colombian, she is still Miss Universe.

"Miss Universe 2015 is Philippines," he added as the music picked up again, with the actual winner, Ms Pia Alonzo Wurtzbach - a high-profile actress and television host - looking stunned.

Colombian President Juan Manuel Santos said on Monday he was shocked by the episode. "I was watching Miss Universe with my family," he told Radio Nacional. "Our queen was marvellous. She looked spectacular. It was such a disappointment when the host said he'd made a mistake.

"To me, our queen is and will remain Miss Universe. They put the crown on her head. The photos are there to prove it. To me, as a Colombian, she is still Miss Universe."

In the Philippines, celebrations broke out despite the gaffe. The presidential palace led in hailing the victory of the German-Filipino model, who this year fuelled gossip of a relationship with 55-year-old President Benigno Aquino by saying they were friends and that "he's very fun to talk to".

The country's last Miss Universe, 1973 winner Margie Moran, said: "I felt sorry for both candidates... and for all the Filipinos... who were watching live. It took away from the experience."

Republican presidential frontrunner Donald Trump, who formerly co-owned the pageant, took to Twitter on Monday to say the incident would not have occurred on his watch. "Very sad what happened last night at the Miss Universe Pageant.... This would never have happened!" the billionaire businessman tweeted.

Mr Harvey also took to Twitter to ask forgiveness for what he called "an honest mistake", but even then managed to misspell the name of the two countries involved - "Miss Philippians and Miss Columbia" - before quickly correcting his mistake. "I'd like to apologise wholeheartedly to Miss Colombia & Miss Philippines for my huge mistake. I feel terrible," said one of his messages, re-tweeted over 85,000 times.

He may have unwittingly caused a rift among the beauty pageant's contestants, going by new video footage that has emerged, which shows Ms Wurtzbach being snubbed by several contestants as she tried to approach Ms Gutierrez after the show.

The "unseen" footage, posted on the Facebook page of online beauty pageant magazine Missosology, highlighted the awkward moment as Ms Gutierrez's friends and supporters gathered in a circle to console her. Ms Wurtzbach, who was trying to join in, was told to "step back" by one of the girls.

Miss Montenegro, dressed in green, was seen shaking her head and walking away. The group then started chanting, "Colombia, Colombia", after Ms Wurtzbach had left.

In just 17 hours, the video attracted more than four million views and over 26,000 comments.