WASHINGTON (REUTERS) - US Senator John McCain called on Tuesday (Sept 19) for an immediate stop to US sailors working over 100 hours a week as top Navy leaders struggled to explain a series of fatal naval collisions in the past few months.

Earlier this month, the Government Accountability Office government watchdog said that a reduction in crew sizes was contributing to safety risks, with some sailors working over 100 hours a week.

"I think I know what 100 hours a week does to people over time and that has been standard procedure for a long time," McCain, chairman of the Senate Armed Services Committee, said. 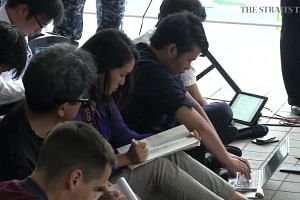 US Navy confirm all seven sailors killed in Japan collision

"I'm glad you've got Rand and whoever the hell else it is that is studying (the issue)... (but) you could make the change tomorrow," McCain added.

Rand is a US-backed think-tank.

The guided missile destroyer John S. McCain, named after the Senator McCain's father and grandfather, suffered significant damage and 10 sailors were killed when it collided with a tanker east of the Straits of Malacca and Singapore on Aug 21.

The John S. McCain's sister ship, the Fitzgerald, almost sank off the coast of Japan after colliding with a Philippine container ship on June 17. The bodies of seven US sailors were found in a flooded berthing area after that collision.

Family members of some of the sailors who were killed were attending the hearing.

Navy Secretary Richard Spencer told the hearing that a review was under way to look at issues within the Navy.

"We have a problem in the Navy and we are going to fix it," Spencer said.

Spencer added that the Navy would consult with outside companies, including BP North America, which has experience in dealing with tragedies. In 2010, a BP rig in the Gulf of Mexico exploded which lead to the worst off shore oil disaster in US history.

Admiral John Richardson, the chief of naval operations, said that a high pace of operations and budget caps had an impact on the Navy, but ultimately Navy leaders were responsible for safety and readiness.

The Navy has fired a number of officers, including the commander of the Seventh Fleet, as a result of the collisions involving its warship in Asia.