WASHINGTON (REUTERS) - The United States is taking steps to avoid exposure to binding decisions by the International Court of Justice (ICJ), the US national security adviser John Bolton said on Wednesday (Oct 3) as he accused the UN court of being "politicised and ineffective."

Secretary of State Mike Pompeo earlier on Wednesday said that Washington was terminating a treaty of amity with Teheran, after the International Court ordered the United States to ensure that sanctions against Iran, due to be tightened next month, did not affect humanitarian aid or civil aviation.

The ICJ, based in The Hague, in the Netherlands, is the United Nations' venue for resolving disputes between nations.

There have been mounting councerns among US allies about the Trump administration's commitment to multilateralism.

In the nearly two years since being elected, President Donald Trump has withdrawn the United States from a nuclear agreement between six powers and Iran, pulled out of a global climate accord, left the UN cultural agency, and threatened Nato military allies that the United States would "go its own way" if members did not spend more on defence.

Wednesday's ruling by the International Court handed a small victory to Teheran, which had argued that sanctions imposed since May by the Trump administration violated the terms of a 1955 Treaty of Amity between the two countries.

Bolton, citing what he called "Iran's abuse of the ICJ,"said that the United States would withdraw from the "optional protocol" under the 1961 Vienna Convention of Diplomatic Relations. 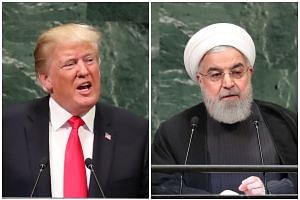 "We will commence a review of all international agreements that may still expose the United States to purported binding jurisdiction, dispute resolution in the International Court of Justice," Bolton said on Wednesday.

"The United States will not sit idly by as baseless politicised claims are brought against us."

The decision to withdraw from the optional protocol follows a complaint brought by the Palestinians in September, which challenged Washington's decision to move its embassy from Tel Aviv to Jerusalem.

The Vienna Convention is an international treaty setting out diplomatic relations between states. It is often cited as a means to provide diplomatic immunity.

In 2005, the Bush administration took issue with the ICJ after it ruled that the execution of a Mexican national in Texas breached US obligations under international law.

The Palestinians argued that the US government's placement of its embassy in Jerusalem violated an international treaty and that it should be moved.

"This really has less to do with Iran and the Palestinians than with the continued consistent policy of the United States to reject the jurisdiction of the International Court of Justice, which we think is politicised and ineffective," Bolton said.

He added: "I'd like to stress the United States remains a party to the underlying Vienna Convention on Diplomatic Relations and we expect all other parties to abide by their international obligations under the convention."

Palestine was recognized by the UN General Assembly in 2012 as a non-member observer state, though its statehood is not recognised by either Israel or the United States.