WASHINGTON (NYTIMES) - Former Vice-President Joe Biden hinted on Tuesday (March 12) that he is close to entering the presidential race, telling a gathering of firefighters who serenaded him with chants of "Run Joe Run" that he was on the verge of announcing his campaign.

But in his remarks to the group, Biden suggested he is ready to fulfil their wish.

After an introduction from his wife, Jill; praise from Harold Schaitberger, the head of the firefighters union; and a video of Biden hailing organised labour that ended with a flashing "Run Joe Run" graphic, Biden praised unions for building the country's middle class.

He also veered far from discussing issues of overtime and collective bargaining, sounding out themes about American renewal that could form the basis of his bid for the Democratic nomination.

"In America everybody gets a shot," Biden said, holding up the country's foundational commitment to racial and religious equality. "That's what the next president of the United States needs to understand and that's what I don't think this current president understands at all."

He scorned President Donald Trump's new budget proposal, unveiled on Monday, which he said cuts Medicare and Medicaid "because of a tax cut for the superwealthy that created a deficit of US$1.9 trillion and now they got to go make somebody pay for it." 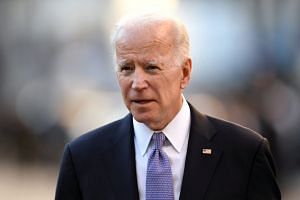 As Joe Biden weighs 2020 bid, Democrats ask: 'Does he meet the moment?' 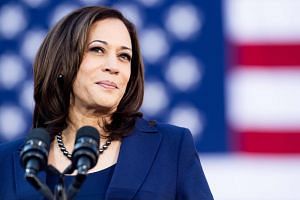 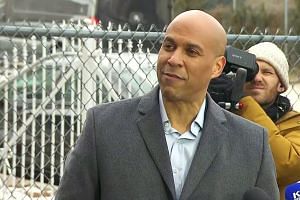 Speaking to a union with a politically mixed membership, Biden also expressed unease with his own party's drift to the left and the deep polarisation gripping the country.

He lamented that a "mean pettiness has overtaken our politics" and said "we seem to be at each other's throats" before again revealing angst at his party's contempt for his instincts for conciliation.

"I get criticised for saying anything nice about a Republican," Biden lamented.

The former vice-president, who was subdued for much of his speech, raised his voice as he neared the end of his remarks and implored the firefighters, who are in the capital for their own annual legislative conference, to remain optimistic about the country's future.

"There is no reason," Biden said, "why we can't own the 21st century. And the rest of the world needs us to lead."

"It is time," he continued, his voice nearing a shout, "to get up and remember who the hell we are."

His appearance before the firefighters, who have long been among his closest labour allies, comes as he and his top advisers indicate to Democrats that he is poised to enter the 2020 race next month.

Before leaving last week for a brief vacation in St Croix, Biden telephoned and met with a number of Democratic officials, signalling to them that he was preparing to run.

"He was leaning towards it," said Senator Chris Coons, who, along with the two other members of Biden's home-state congressional delegation, had lunch with the former vice-president at his office at the foot of Capitol Hill.

"Everything necessary to lay the groundwork for a successful campaign is under way."

Coons said Biden used the lunch to ask the lawmakers detailed questions "on a wide range of topics," including the political dynamics in various states, the mood in the Senate caucus and how to organise robust digital, grassroots and fund-raising efforts.

Yet even as Biden and one of his principal advisers, Steve Ricchetti, assure Democratic officials that he is all but certain to run, doubts persist that he will enter the race.

For months, Biden has sped past his own self-imposed deadlines about deciding whether to mount what would be his third White House bid. Speaking last month at the University of Delaware, he bluntly expressed his concerns about running, ruminating on the difficulty it could present to his family - Biden is particularly concerned about coverage of his son, Hunter, who is emerging from a divorce - and wondering if pursuing the nomination would be "a fool's errand."

Biden's identity as a 76-year-old white moderate in a party that is increasingly young, progressive and diverse has left many Democrats, including his admirers, sceptical about his prospects.