PITTSBURGH (NYTIMES) - John Cabon stood quietly and crossed himself before a statue of the Virgin Mary outside St Paul's, the mother church of the Pittsburgh Diocese.

"I keep the faith," said Mr Cabon, 64, on the way to noon Mass. His sister, he said, left the faith when explosive revelations of sexual abuse rocked the Roman Catholic Church in 2002. He had refused. "You don't really believe everything, you know."

But inside the church, there was no escaping the abuse scandal, which has entered a new chapter after monstrous revelations were released in a grand jury report on Tuesday (Aug 14), describing the abuse of more than 1,000 young people at the hands of hundreds of priests in Pennsylvania.

The priest at St Paul's spoke of "horrendous and evil acts", "moral failure" by church leaders, and the "grief, sadness, feelings of betrayal, even anger" that followed. One woman wept silently in her pew.

In Pittsburgh - the site of some of the most ghastly acts in the report - and in dioceses around the country, Catholics grappled with the report's findings.

Some had stayed with the church after explosive revelations of priest abuse over a decade ago, which implicated leaders but prompted promises by the church hierarchy of atonement.

And now came descriptions of priests engaged in rape and child pornography for decades, using "whips, violence and sadism", and in one case joining together in a secret cabal of abusers. Even more painful, the report contained accounts of bishops who had actively defended the accused priests. 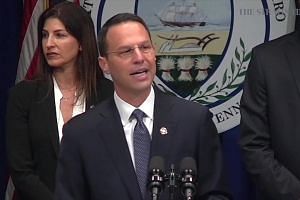 "I think right now it's really hard to be a Catholic," said Mr John Gehring, the Catholic programme director of Faith in Public Life, a national network of faith leaders. "Everywhere you look, things seem to be falling apart."

The fallout is not limited to Pennsylvania.

In Nebraska's Diocese of Lincoln, the bishop has apologised in recent days for his handling of misconduct allegations against priests, including one he told "not to be alone with females" and another who he said had an "emotionally inappropriate, non-sexual relationship with a 19-year-old male."

A Catholic school in Baltimore will no longer be named for William H. Keeler, the cardinal who died last year and was once seen as a champion for sexual abuse victims but who was singled out in the grand jury report for failing to take action on more than one priest accused of abuse.

On Wednesday, Cardinal Sean O'Malley, archbishop of Boston and chairman of the Vatican's Commission for the Protection of Minors, announced that he will not be attending the World Meeting of Families in Dublin this month, a major event the pope will attend.

In a statement, Cardinal O'Malley said that he must remain in Boston to handle issues at St John's seminary in Brighton, Massachusetts. Last week, he placed the rector on leave and launched an investigation into the seminary's culture following allegations of sexual misconduct at the school.

Wednesday was also the day that Catholics celebrated the assumption of Mary into heaven. The dissonance was not lost on people.

"Here we are, on the Feast of the Assumption, and Jesus is looking at his mother and saying, 'Look what they have done to my church,'" said Ms Jessica Bede, a parishioner of Our Lady of Peace Church in Manhattan, which was shuttered in a round of church closings. "They have chewed it up."

Along with others interviewed on Wednesday, Ms Bede said she believed the church leadership had not been living up to its people. Several said that if church leaders had trusted in the unshakable faith of the parishioners, they would not have engaged in such extraordinary cover-ups. But the leaders had fallen short, again.

In Boston, Ms Barbara Bowe, a nurse who had grown up in Catholic schools, said she had fallen away from the church. And with the latest round of revelations, she seemed unlikely to return anytime soon.

"As far as priests and nuns being believed, that's gone," she said. "The authority is gone."

A few blocks away from the white cross towering above the Archdiocese of Miami, Ms Mirta Criswell, 77, was loading dollar-store provisions into the back of a sedan. Of the report, she said, "I believe it 100 per cent."

Ms Criswell said the sex abuse scandal that began in Boston in 2002 had been painful enough, but the latest reports had left her ever more exasperated. While the scandals would not erode her commitment to the faith, she believed they showed that some of the church rules needed to be revisited.

"The Catholic Church has to change," she said. "They have to let their priests marry, to have a family. Humans need sex."

But others said the report was just more evidence of the frailty of humans, and that it would not shake their faith.

"There's a lot of bad apples, and they've got to be cleaned out," said Mr Robert Romano, 62, after praying at Holy Innocents Church, on West 37th Street in Midtown Manhattan. But, he added, "I'm not coming to church for a priest. I'm coming because in my heart, there's something else."

A few Catholics even saw the revelations, as horrific as they were, as cause for hope.

"This is a very good and healthy thing," said Mr David Williams, leaving noon Mass at St Paul's in Pittsburgh. The report was indeed terrible, he said, and he assumed more was to come.

It was painful on a personal level: One of his 15 children is a priest, and one of his grandchildren is in seminary in Rome. But, at 88 years old, Mr Williams said he has seen plenty of bad in his time, and he was fully optimistic that the church would be healed.

"You can't atone without facing the fact that you have sinned," he said.

The pain among Catholics was nationwide, but there was a special anguish in Pittsburgh, where many knew one or more of the 99 priests from the diocese listed in the report.

"To flip through the pages and have a name leap out at me like that, you know, my childhood priest," said Mr Brett Sullivan Santry, 44. He grew up as an altar server, later lapsing in his faith while going through a divorce. More recently, drawn by Pope Francis and inspired by his daughter's education in Catholic schools, he felt as if he might be turning back to the church. And then, on Tuesday, he read the report.

"Painfully, to realise almost a sense of relief that I hadn't been an altar server that he'd abused," he said of his childhood priest, the Reverend George Koychick, who was described in the report as having molested multiple underage girls.

Mr Santry was not sure what this would all mean for his faith, or for his daughter's. He still identified as Catholic and saw all the genuine good the church had done for them.

“For that I’m thankful,” he said. “But now someday, I’m going to have to explain to her, you know...” he paused to think of the right word - “this. We may have a conversation at some point in the future about this. What the hell do I say?”