WASHINGTON (REUTERS) - A senior US diplomat told lawmakers on Wednesday (Nov 20) that President Donald Trump expressly ordered him and others to pressure Ukraine into investigating a political rival, providing some of the most significant testimony to date in a Democrat-led impeachment inquiry.

Wednesday's proceedings began with US Ambassador to the European Union Gordon Sondland.

Two other witnesses - Laura Cooper, deputy assistant secretary of defence for Russian, Ukrainian and Eurasian affairs; and David Hale, undersecretary of state for political affairs - were due to testify later in the day.

Below are reactions to Sondland's testimony and the impeachment inquiry from outside the room:

"White House Confidence Grows As Hearings Wear On." #WashTimes This is just an attempted takedown of the Republican Party by the Do Nothing Democrats. It will never work. #2020" "The three year Hoax continues!"

PAM BONDI, SPECIAL ADVISER TO THE PRESIDENT, IN AN INTERVIEW ON CBS 'THIS MORNING':

"The president does not know him (Sondland) very well. He's a short-term ambassador." She also said the president was not likely to testify to lawmakers: "Of course he wants to testify, because he did nothing wrong. But do I think it's likely he's going to testify?

Probably not, because no one would advise him to testify because this is a sham court."

"Gordon Sonland (sic) never told Secretary (Mike) Pompeo that he believed the president was linking aid to investigations of political opponents. Any suggestion to the contrary is flat out false."

"This is a John Dean moment. It will live forever in American political history."

"During the July... conversation @realDonaldTrump agrees to a meeting with Pres. Zelensky without requiring an investigation, any discussion of military aid or any condition whatsoever. This record shows definitively no quid pro quo, which is the same as no bribery. END OF CASE!"

"Sondland has already testified under oath that: There were NO preconditions regarding Ukrainian aid. @realDonaldTrump told him personally: 'I want no quid pro quo. I want Zelenskiy to do the right thing ... to do what he ran on.' It's clear: There was #NoQuidProQuo!" 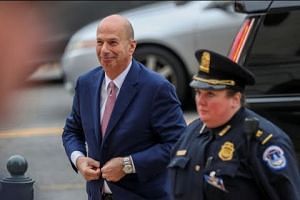 "This is the Pence vice presidency in a nutshell. Sondland recalls telling Pence he understood that the Ukraine aid was being tied to Trump's request for political investigations.

PENCE CHIEF OF STAFF MARC SHORT, IN A STATEMENT:

"The vice president never had a conversation with Gordon Sondland about investigating the Bidens, Burisma, or the conditional release of financial aid to Ukraine based upon potential investigations. This alleged discussion recalled by Ambassador Sondland never happened."

"There it is folks! Ambassador Sondland CONFIRMED that nobody on earth told him @realDonaldTrump was tying aid to investigations. So this is all based on presumptions that turned out to be wrong. Why is this impeachment circus still going on?"

PREET BHARARA, FORMER US ATTORNEY FOR THE SOUTHERN DISTRICT OF NEW YORK, ON TWITTER:

"Sondland is destroying virtually every Trump defense: Trump didn't care about Ukraine; there was a quid pro quo; Trump & Rudy demanded the announcement of investigations; everyone was in the loop; Ukraine knew about the linkage; all was directed by Trump."