WASHINGTON (Bloomberg/AFP) - A historic deal with Iran will close off any possibility the country can develop nuclear weapons, halting a potential arms race in the Middle East, United States President Barack Obama said in a speech aired 'live' on Iranian TV.

The accord, which will take months to be fully implemented, will stand as one of the chief foreign policy accomplishments of Mr Obama's two terms. Mr Obama said it builds on a US tradition of negotiating with foes including the former Soviet Union.

"This deal demonstrates that American diplomacy can bring about real and meaningful change, change that makes our country safer and more secure," Mr Obama said on Tuesday at a speech in the White House.

In exchange for lifting painful economic sanctions on Iran, which holds the world's fourth-largest oil reserves and second-largest natural gas deposits, the Islamic Republic is agreeing to restrictions and inspections intended to prevent it from developing nuclear weapons.

"We have stopped the spread of nuclear weapons" in the Middle East, Mr Obama said, calling the area "the most volatile region in the world". 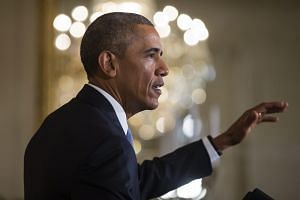 With Iran deal, US President Obama gets his big diplomatic win

Obama said the deal - which would curb Iran's nuclear program in return for sanctions relief - cut off "every pathway" to an Iranian atomic weapon.

"Today, because America negotiated from a position of strength and principle, we have stopped the spread of nuclear weapons in this region," he said in a White House address.

Describing a "difficult history" between Iran and the United States that "cannot be ignored", he said the diplomatic victory also showed "it is possible to change".

Mr Obama said the nuclear deal with Iran offered a chance to move in a "new direction" in relations with Teheran, but promised a skeptical Israel that Washington would not abandon it.

"Our differences are real. The difficult history between the nations cannot be ignored. It is possible to change," Mr Obama said. "This deal offers an opportunity to move in a new direction. We should seize it."

The US president nevertheless promised to "continue our unprecedented efforts to strengthen Israel's security, efforts that go beyond what any administration has done before".

He spoke in the White House's Cross Hall, a wide, red-carpeted hallway in the middle of the mansion. Mr Obama has chosen the setting for several major public addresses, including the announcement of Osama bin Laden's death in 2011.

Iranian state television broadcast Mr Obama's statement "live" on Tuesday, only the second such occasion since the Islamic revolution of 1979.

The state broadcaster had also aired Mr Obama's comments on an April 2 framework accord that led to Tuesday's historic agreement.

Before taking effect, the agreement must survive a political battle in the US Opponents will press Congress to block it, while Republicans want to weaken Democrat Hillary Clinton's 2016 presidential bid by linking the former secretary of state with an agreement they say offers too many concessions to Iran, endangering the US and Israel.

The sanctions relief is contingent on Iran complying with terms of the agreement, according to a copy of the accord obtained by Bloomberg News. Iran agreed to cut 98 per cent of its enriched uranium stockpile and eliminate two thirds of its centrifuges.

Even before the deal was finalized, opposition mounted in Congress. Criticism escalated Tuesday after details were released. 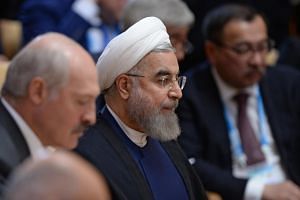 Senator Ben Sasse, a Nebraska Republican, said in a statement that the Obama administration "just lit the fuse for a nuclear arms race in the Middle East" and that the deal "begins the era of managed proliferation."

Senator Bob Corker, a Tennessee Republican who's the Foreign Relations Committee chairman, said Sunday on the NBC programme "Meet the Press" that he was uneasy about the direction of negotiations with Iran.

Israeli Prime Minister Benjamin Netanyahu, who warned against deal-making with Iran in a March address to Congress, excoriated the agreement soon after its announcement on Tuesday.

"World powers have made far-reaching concessions in all areas that were supposed to prevent Iran from obtaining a nuclear weapons capability," he said on Twitter.

Congressional power to stop the deal is limited. Legislation Mr Obama signed in May allows lawmakers 60 days to review the agreement and, if they choose, pass a resolution of disapproval. Mr Obama could veto that resolution, however, requiring two-thirds majorities in the House and Senate to override him and block the Iran accord.

Mr Obama's outreach to Iran dates to the start of his presidency. In a March 2009 video message celebrating the Persian new year, Mr Obama told the Iranian people and the government under then President Mahmoud Ahmadinejad that the US was committed to "engagement that is honest and grounded in mutual respect".

In the video, which included Farsi subtitles, he said he wanted Iran to "take its rightful place in the community of nations" while saying it couldn't achieve that through terror or arms.

By 2013, with secret talks between US and Iranian officials under way, the US saw Mr Hassan Rouhani's election as Iran's president as a greater opening for engagement. The two leaders spoke by phone in a 15-minute call that was historic in its own right, the highest-level U.S.-Iranian encounter since before Iran's Islamic revolution of 1979.

"Khoda Hafez," Mr Obama said to close the call, a way to say goodbye in Farsi that translates to "God be with you".

By this year, a deal seemed possible though not certain. Two weeks after a framework agreement was announced April 2, Mr Obama said in a news conference that the talks with Iran required "creative negotiations." It was possible to craft a deal, he said, in which sanctions could be snapped back into place if Iran cheated.

"There are deep-seated disagreements and divisions between the United States and Iran, and those aren't going to go away overnight," Mr Obama said in a June 30 news conference. "The goal of the nuclear negotiations is not to rely on trust, but to set up a verifiable mechanism where we are cutting off the pathways for Iran to obtain a nuclear weapon."

The US has yet to secure the release of at least three Americans held by Iran, including journalist Jason Rezaian, who faces espionage charges. Mr Obama said in April that Rezaian was wrongly held and "we will not rest until we bring him home to his family, safe and sound".

Iranian authorities held a third hearing on Rezaian's charges on Monday "without conclusion", Mr Marty Baron, the executive editor of the Washington Post, Rezaian's employer, said in a statement on Monday.

"We call again on Iran to deliver a speedy, fair and impartial judgment in Jason's case, one that could only result in his acquittal, immediate release, and a long-overdue reunion with his family," Mr Baron said.