WASHINGTON - A hot summer day in Washington DC, May 8, 2018 will be remembered as the day the United States pulled out of the 2015 Iran Nuclear Deal, an agreement with Iran signed also by China, France, Germany, Russia, the United Kingdom, and the European Union.

The decision was not a surprise given President Donald Trump’s long-maintained dislike of the deal as the “worst ever.” And it had little to do with whether Iran was in compliance (it is), as National Security Adviser John Bolton made clear to journalists minutes after Mr Trump’s announcement.

“Look, this deal was fundamentally flawed,” he said. “It does not do what it purports to do.  It does not prevent Iran from developing deliverable nuclear weapons. It allows Iran to continue technologies like uranium enrichment, reprocessing of plutonium.  It allows them - even if they're in compliance with the deal - to increase their research and development on the sophistication of their nuclear capabilities.”

The US withdrawal and reimposing of sanctions on Iran, comes at a particularly volatile time with Israel and Iran already in sporadic conflict in Syria, where Iranbacks the regime of Syrian President Bashar al Assad.

Over the weekend, Israel’s energy minister Yuval Steinitz was quoted saying, “If Syrian President Bashar al-Assad continues allowing Iran to operate within Syrian territory, Israel will liquidate him and topple his regime.”

In a worst case scenario, if Iran were to decide to restart its nuclear programme – even if declaring it peaceful – it could elicit strikes by Israel. Iran would then retaliate, directly or through proxies.

The US’ pullout “empowers Israel and Saudi allies against Iran and probably regarding Syria and Lebanon; it opens way for intensifying military conflict and even regional war,” Dr Inderjeet Parmar, professor of international politics at the City, University of London, cautioned in a message to The Straits Times.

It also come at a time when there are internal tensions in Iranian. President Hassan Rouhani will be weakened by the collapse of the deal, analysts say – to the advantage of hardliners. 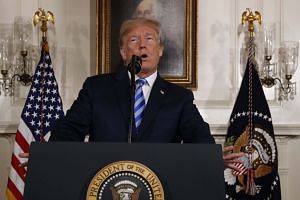 But Iran public opinion may well coalesce to support both the powerful clergy – led by Supreme Leader Ali Khamenei – and the government of President Rouhani.

A senior diplomat in Washington familiar with Iran, told The Straits Times: “A lot of Iranians, whether they are clerical or not clerical, are united on one issue : they believe Iranians have a right to have a nuclear programme.”

“They may be amenable to a discussion on how to manage it, but not to give it up. They believe it is their natural right, they say if Israel has it, why can’t we have it.”

It is unlikely that Iran will implode, Dr Glenn Altschuler, professor of American studies at Cornell University told The Straits Times. “Populations tend to unite when faced with and external threat,” he said.

The problem, is that the sweeping economic sanctions the US has reimposed – some immediately and others in 180 days – will also affect its allies in Europe and elsewhere who do business with Iran. France and Germany and in the region, India, will be saddled with a balancing act as they weigh their ties with the US with their business ties with Iran, which is a major oil exporter.

“This involves the significant gamble that the Europeans will fall into line to avoid being sanctioned,” Dr Glenn Altschuler, professor of American studies at Cornell University, in a phone interview told The Straits Times.

“On the other hand, distancing itself from Iran runs the risk of opening the door for India's strategic rivals China and Pakistan to woo Iran into their camp, curtailing India's ability to maintain strategic access into Afghanistan and Central Asia,” he said.

Democratic Congressman Adam Schiff, ranking member of the House Intelligence Committee, tweeted: “Decision to withdraw from #IranDeal will undermine our national security, increase prospect of a nuclear Iran or a conflict with them, and cause the world to conclude America doesn't keep its word.”

He added : “Scuttling the deal without a Plan B is not a strategy, but a dangerous abdication.”

Dr Parmar wrote “This is US hard power on full brutal display.  The US has been losing global positions and influence to regional rivals and it is now using its economic and military muscle to try to reverse trends.”

“The US is a revisionist power,” he wrote. But he cautioned “It could have the opposite effect as it alienates allies and public opinion. Trump says he carries out campaign promises but he also promised no meddling in the Middle East and no military interventions there.”

“The principle message to the President’s domestic audience was that unlike his predecessors, he is tough and puts America first, he does not do multilateral deals because they increase the likelihood of compromise, and if it’s a bad deal then he will not make it just because some people say any deal is better than no deal,” he said.